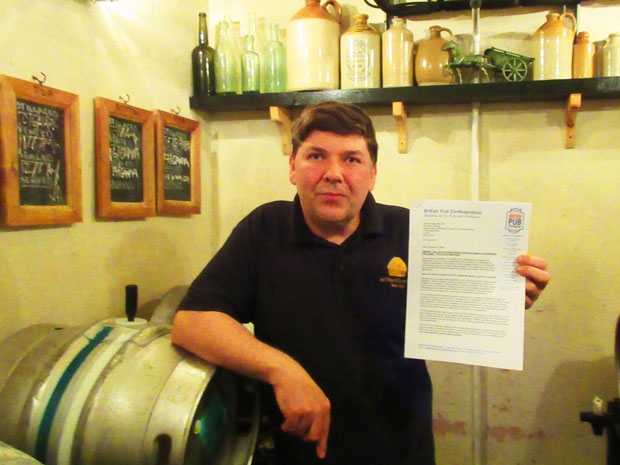 Gary Murphy in the cellar of The Mitre with a letter from the British Pub Confederation praising his “courage and tenacity”
High Barnet publican Gary Murphy, landlord of The Mitre for the last ten years, has won a significant victory over the Pubs Code Adjudicator that he hopes will ease the financial difficulties facing many of the 15,000 landlords in England and Wales.

Almost 1,000 pubs closed last year, and many were tied houses, like The Mitre, struggling to pay their way because of high rents and additional beer charges.

After a lengthy battle fought with the help of his lawyers, Mr Murphy has forced the Pubs Code Adjudicator to withdraw a controversial interpretation of the 2016 Pubs Code which Mr Murphy says was denying landlords and landladies the chance to negotiate a fair rent and to break free of the beer tie.

“Forcing the adjudicator to withdraw his advice and to admit he made a mistake will make it easier for pub tenants who are up against the big pub companies.

“Tenants were being forced to pay for additional arbitration costs, but the Adjudicator has now been forced to withdraw that advice and this has removed what was a substantial barrier facing tenants.”

The British Pub Confederation, which represents licensees and tenants, hailed Mr Murphy’s achievement in proving that the Pubs Code Adjudicator had been wrong and had been acting in a way that did not abide by the Pubs Code approved by Parliament in 2016.

“It is remarkable that the Pubs Code Adjudicator has been forced into this humiliating climbdown through the courage and tenacity of Gary Murphy, landlord of The Mitre,” said Greg Mulholland, chair of the British Pub Confederation.

“Most tenants have simply had to give up pursuing a genuine market rent only option, and many have left their pubs altogether, but Mr Murphy persisted, including crowdfunding his own legal costs.”

Mr Murphy won concessions from his pub company landlord Greene King: “a rent which is still high but one I can live with and freedoms on the beers we sell.”

So far, he has spent £20,000 of his own money fighting for better terms and taking on the Adjudicator. In addition, he has raised £12,000 in crowd funding in case he needed to take the Adjudicator to court. “The money is still there in case this does end up with a court case, and in case we can help other publicans with their legal costs.”

The money is still there in case this does end up with a court case, and in case we can help other publicans with their legal costs

Mr Murphy said he noticed a mistake in the adjudicator’s advice after Parliament approved the 2016 Pubs Code; Parliament’s clear intention was to make it easier for tenants to negotiate a fair rent and go free of the beer tie.

“But the adjudicator’s advice note supported the pubcos belief they could impose additional arbitration costs. It is now clear this isn’t lawful.”

“In the end the adjudicator backed down before going to court but has still failed to admit the mistake and this has all taken two years.

“In the meantime, thousands of tenants have had to go through the legal process, and some have been pushed out of business because of the intransigence and delay.”

The Pub Confederation has written to the Secretary of State for Business, Greg Clark, demanding that the adjudicator should be held to account for an error that has affected “thousands of tenants and indeed denied them their legal rights”.

Mr Clark has been urged to remove the adjudicator (Paul Newby) and replace him with an “independent and impartial person” with the necessary skills to uphold the Pubs Code and to “rebalance the relationship between the large pubcos and their tenants”.