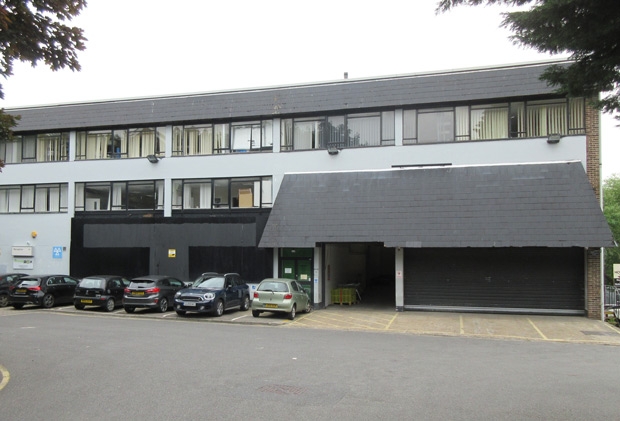 Barnet Council’s website for planning applications registered a total of 34 objections by the closing date (27.6.2019).

They were highly critical of what was described by the objectors as “crowded, cramped and sub-standard living space” that resembled “a Dickensian workhouse”.

In its response, the Barnet Society “strenuously objects” to the plan on the grounds that over half the studio flats would be “devoid of any natural light, ventilation or views” and similar applications showing a “gross disregard for basic internal and external amenity” have been refused.

Intec House, at 49 Moxon Street, was formerly a servicing centre for Jaguar and Land Rover vehicles but is currently used as a commercial warehouse and office by Trade Box.

When Hadley Green Garage departed from the building it reverted to office use, and under the government’s permitted development legislation of 2015, office space can be converted for housing.

Plans for the conversion to studio flats have been prepared by Dandi Living Ltd, which designed 97 compact living flats at Sovereign Court, Hounslow.

The application states that Intec House would be reconfigured to provide 107 self-contained studio flats on the ground, first and second floors.

Residents would have access to a co-working space and gym on the ground floor and a lounge and event space on the first floor.

Internal studio flats would look out onto a garden atrium which would “improve daylight conditions in the building”.

On the lower ground floor there would be 120 cycle parking spaces, a waste and recycling storeroom and outside 20 car parking spaces, four disabled spaces and electric charging points.

Dandi Living says the site for the studio flats is “well located in relation to amenities and facilities in Barnet town centre”.

The application emphasises that change of use from office space to housing is lawful in this case – a justification seized upon by one objector who argued that this was an attempt by the applicants to beat the ending of the easing in planning laws under the permitted development legislation.

Most of the objections to the Moxon Street development criticise the conversion on the grounds that they believe the studio flats will be under 15 square metres, which is less than half the statutory space for a studio flat.

A retired doctor said he was horrified by the thought that humans might be squashed into “cages only 15 metres square”; a retired chartered surveyor argued that the flats were “little more than cells, with very little light”.

Another objector feared that vulnerable people such as the homeless and refugees might be forced to live in “temporary hostel type boxes” which would be unsuitable for children, could lead to the tenants suffering from depression and would attract crime and anti-social behaviour.

The location of the complex at the end of Moxon Street was criticised on the grounds that it would have considerable impact of nearby houses and “destroy the harmony and safety” of the neighbourhood.

Moxon Street was “too steep to cycle up” and the redevelopment would require the felling of trees around the site which would detract from the appearance of the area.

In registering the Barnet Society’s objection, Robin Bishop (chair) says that a similar application was refused on the grounds that splitting up a property to provide numerous separate households added to “disturbance, congestion and disruption” to neighbouring residents and the Moxon Street conversion would have a far worse impact.

He argued that the application was “a cynical exploitation of planning loopholes, compounded by disregard for basic human needs.”