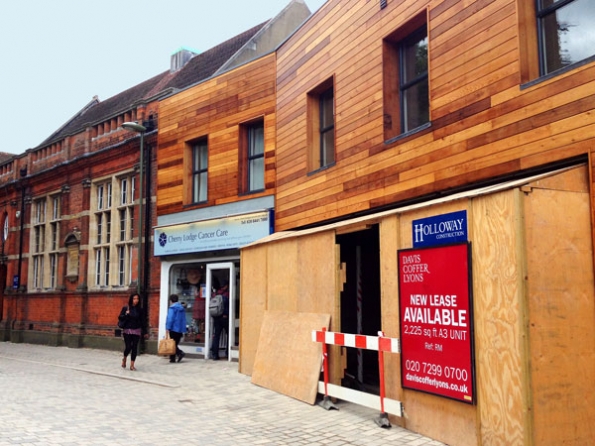 Swiss chalet or a fine addition to drab frontage?
After a rising chorus of protest from local community and residential groups, Barnet Council has finally issued an enforcement notice requiring the removal of timber cladding to the frontage of a former cafe and shop in Church Passage, just off the High Street.

But the owner of the premises, which overlook the gardens of the parish church of St John the Baptist, says he has been “inundated with praise from passers-by” who think a local eyesore has been vastly improved.

However strong the division of opinion over the merits or otherwise of a timber-clad frontage being added to a property with two older, well established buildings on either side, the fact remains that planning permission was required.

In its enforcement notice, which will take effect on 11 September 2013, Barnet Council says the timber cladding is a breach of planning control and is “an incongruous and dominant feature of the street scene”; the change to the front elevation was to the “detriment of the character of this part of the Wood Street conservation area and to the settings of the adjacent listed buildings”.

The owner of 1 and 1B Church Passage, Martin Cramer, has been given three months to remove the cladding and restore the property by “making good and smooth rendering” the front elevation to its original colour of white.

Rarely have local groups been so angered by what they consider is a flagrant breach of a much-valued conservation area, but despite their complaints there is no guarantee that Barnet Council’s enforcement notice will achieve removal of the timber cladding.

If there is an appeal within the three-month time limit – and the Council consider that this is likely – it would take the Secretary of State’s planning inspectorate approximately six months to make a decision, and in the event of the appeal being dismissed, there would still be another three months in which to carry out the work.

The length of the process and the uncertainty over the outcome of an appeal offer little encouragement to the Barnet Society and Barnet Residents Association which have both urged Barnet Council to take immediate action. 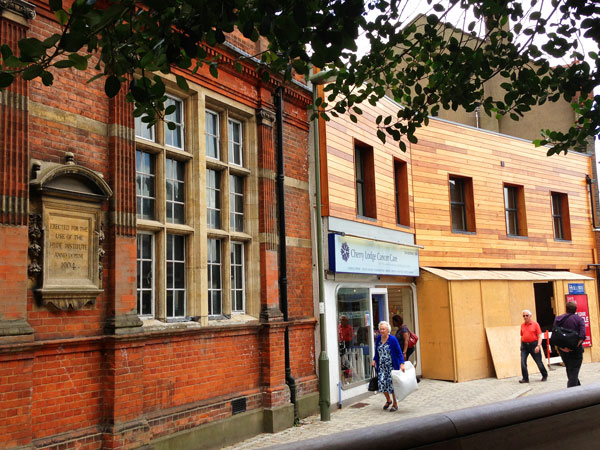 Although a notice has been issued, Iain Sutherland-Thomas, a planning enforcement officer for the borough, says that while the council thinks it would have “a good case” if the owner appealed, success is not inevitable, a response that has disappointed members of Barnet Society’s planning committee.

Its chair, Robin Bishop says the re-cladding above what was formerly Cafe Pacino and the Cherry Lodge Cancer Care shop has “flagrantly flouted the whole point of the Wood Street conservation area” and has also wasted the Mayor of London’s investment last year, via the Outer London Fund, in a new canopy and signage for Cafe Pacino.

“While the orange stripy look of the timber cladding might suit other locations, our historic centre, facing the churchyard of St John the Baptist, is not one of them.”

He and the Barnet Society see this as an early test case for the effectiveness of the new One Barnet planning team which is due to be outsourced from 1 October 2013.  “We shall have to wait and see whether our councillors are committed and proactive enough to enforce the planning law and protect the historic heart of High Barnet.”

Helen Massey, planning officer for Barnet Residents Association, complained directly to the owners.  She said the timber cladding was “totally inappropriate for an old-fashioned property in a conservation area” and looked as if it belonged on a “Swiss chalet”.

In his reply Martin Cramer said he thought the task of local organisations was to help rather than hinder local businesses.

“We can agree to differ as to your taste regarding the front elevation.  We have in fact been inundated with praise from passers-by as the previous tacky pebbledash, which in our opinion was an eyesore, made this building and this part of Barnet very drab.

“Regardless, it had to be replaced as it had long passed its sell-by date due to water penetration making it unstable and extremely dangerous.”

Joint the debate: Tell the Barnet Society what you think of this change in appearance.  Does timber cladding add a welcome new dimension to Church Passage or has it damaged the heart of the Wood Street conservation area?

More in this category: Plans for Union Street »