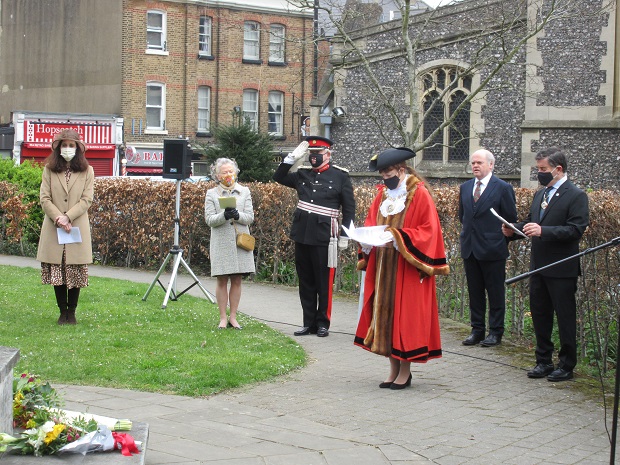 A socially distanced service, the chiming of the parish church bell and a minute's silence marked the centenary of Chipping Barnet war memorial.

Easter Saturday was the 100th anniversary of the unveiling of the memorial in April 1921 by General Lord Byng of Vimy in honour of the “Barnet boys who gave their lives...by paying the greatest sacrifice” in the First World War.

Martin Russell, representative deputy lieutenant for the Borough of Barnet, recalled the history of the memorial before flowers were laid at the base of what he said was the place where people in Barnet had been drawn for 100 years to express individual and collective grief.

“We stand here now as other have for 100 years, under the cross, the sign of peace, and who knows what the future may hold and what important place this cross may come to play.”

Mr Russell, seen above taking the salute while the Mayor of Barnet, Councillor Caroline Stock, gave the thanksgiving, was also by supported the Chipping Barnet MP, Theresa Villiers (far left).

He described the controversy there was in the 1930s when the memorial was moved to the churchyard from its position in front of the parish church to make room for a turning circle the trolley buses that replaced the previous terminus for trams.

“The memorial is now in a fitting place of tranquillity...Not all the names on the memorial are English, several are unlikely to have been Christian, many of those named are largely forgotten but some families still live locally, and familiar faces appear each year.” 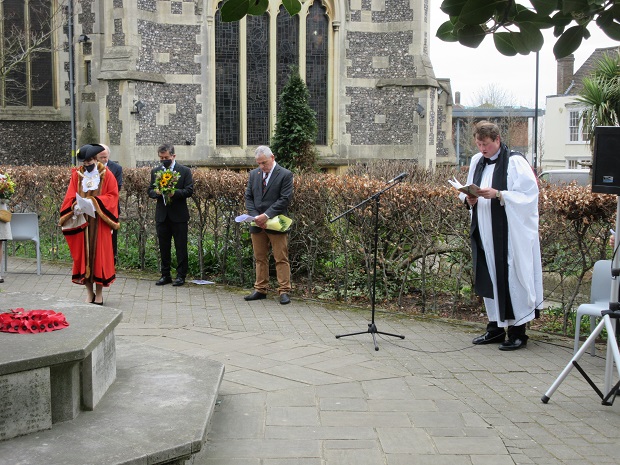 Father Tristan Chapman, the acting rector of Chipping Barnet, who conducted the service, remembered the parents, partners, and children who mourned those who had lost their lives in two world wars.

For a century, the memorial had been a focal point for the people of Chipping Barnet, a “symbol of a shared regret and grief, a tribute in stone from this town to those who gave their all.”

Also contributing to the act of remembrance was Major Richard Farrar, the officer commanding 240 squadron, 151 regiment of the Royal Logistic Corps, which is based in St Albans Road.

The service concluded with the singing of the national anthem – an act which Father Tristan said was now allowed under the latest easing of restrictions on outdoor communal singing. 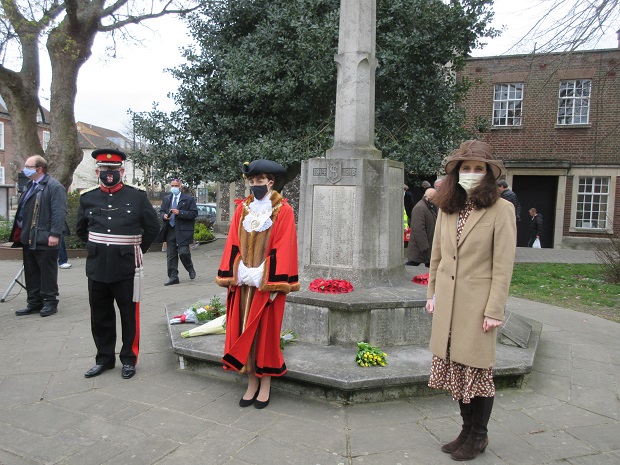 When the memorial was unveiled, 246 names were inscribed on the four sides of the plinth, but more were added later as were the names of those who lost their lives in the Second World War.