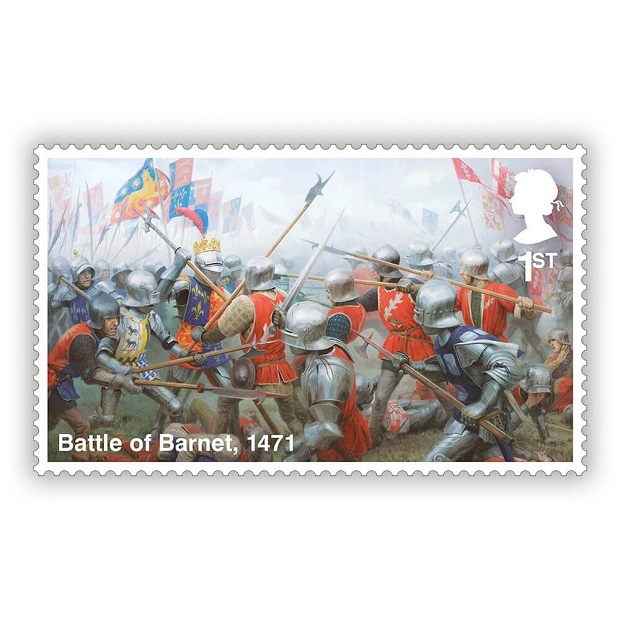 Celebrations to mark this year's 550th anniversary of the Battle of Barnet will gain added impetus next month with the release by the Royal Mail of eight commemorative stamps illustrating scenes from the Wars of the Roses.

One of two first class stamps in the set is a much-admired depiction of the Barnet battle by the medieval and military artist Graham Turner.

The full set of eight stamps will be available from May 4 and can be pre-ordered via the Royal Mail shop’s website - https://shop.royalmail.com/the-wars-of-the-roses-stamp-set 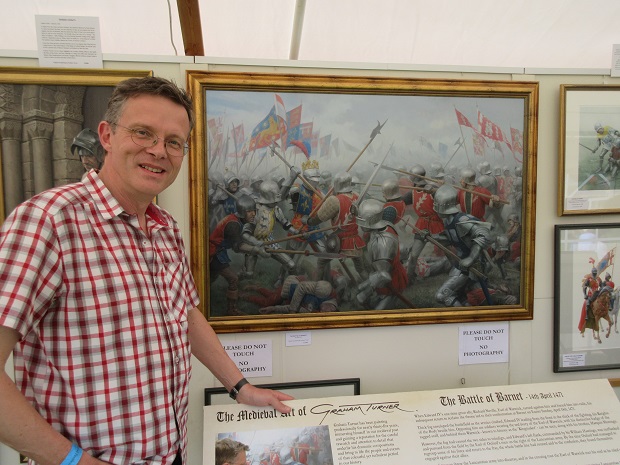 Mr Turner’s painting of the clash that took place just north of Barnet on 14 April 1471 was unveiled at the 2019 Barnet Medieval Festival.

After its cancellation last year because of the covid.19 pandemic, the Medieval Festival Committee is hoping – all being well – to stage a rescheduled festival this autumn over the weekend of 11-12 September.

A crowdfunding campaign to help finance the two-day festival, which will include a re-enactment of the Battle of Barnet and a medieval encampment and market, has already been pledged nearly £3,500.

The target is £25,000 by July 1 and the committee is appealing for generous pledges – https://www.spacehive.com/battle-barnet-550

Medieval re-enactors have promised their support for the festival and the organisers hope to firm up the programme of events once social distancing arrangements have been finalised with Barnet Council and insurance cover has been agreed.

Mr Turner’s paintings feature on all eight stamps and illustrate the key battles in the 30-year conflict between the House of Lancaster and the House of York for control of the English throne.

His artwork has been praised by the Battlefields Trust which says his paintings, always carefully researched, are “exciting and evocative”.

“Graham is a great friend of the Barnet Medieval Festival and we are thrilled by the Royal Mail’s decision to feature the Wars of the Roses and increase still further interest in this dramatic period of our history.” 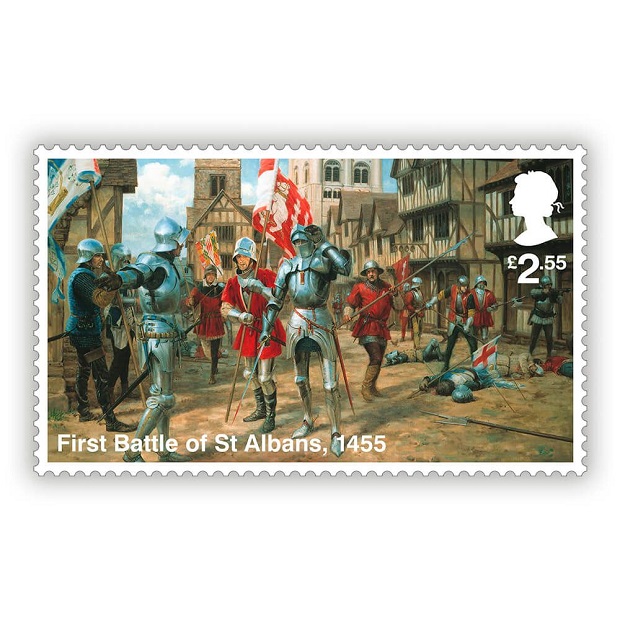 Much of the inspiration for the launch of the Battle of Barnet project, which was backed by the Heritage Lottery Fund, came from long-standing efforts to establish a medieval festival to commemorate the Battle of Tewkesbury, which also celebrates its 550th anniversary this year. 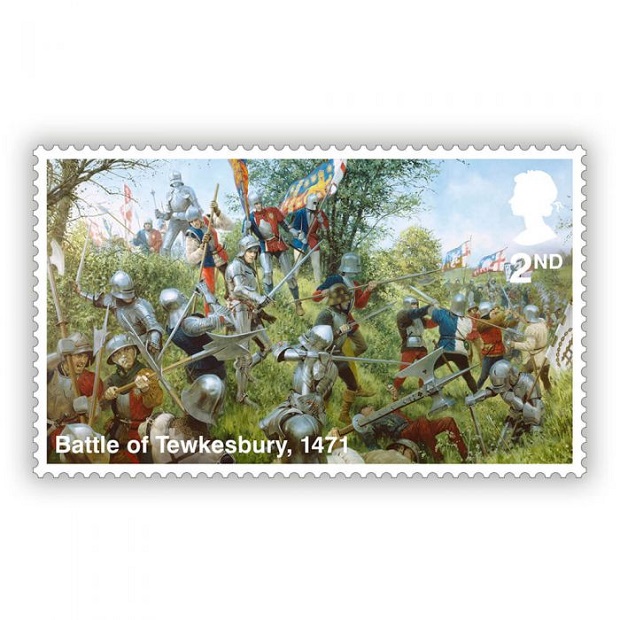 Mr Turner’s painting depicts the Yorkist King Edward 1V leading his men forward at Tewkesbury on 4 May 1471 – the date chosen by the Royal Mail for the release of the commemorative stamps. 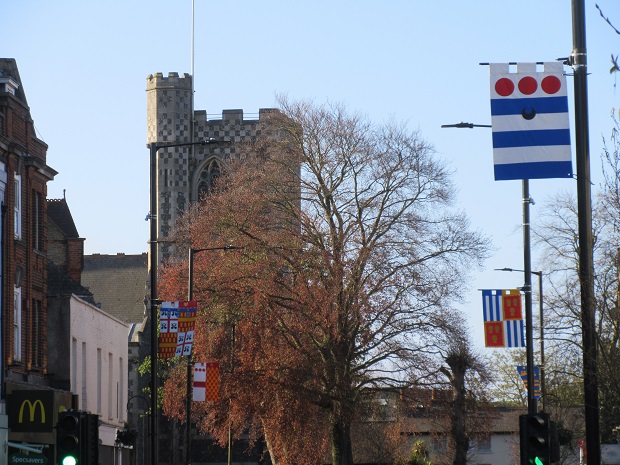 After a break last year because of social distancing restrictions, Barnet High Street is once again bedecked with over 70 heraldic banners which were in place in good time for the wreath laying at Hadley Highstone to commemorate the men who lost their lives at Barnet.

Another stamp in the series commemorates the Battle of Bosworth, one of the last in the Wars of the Roses. 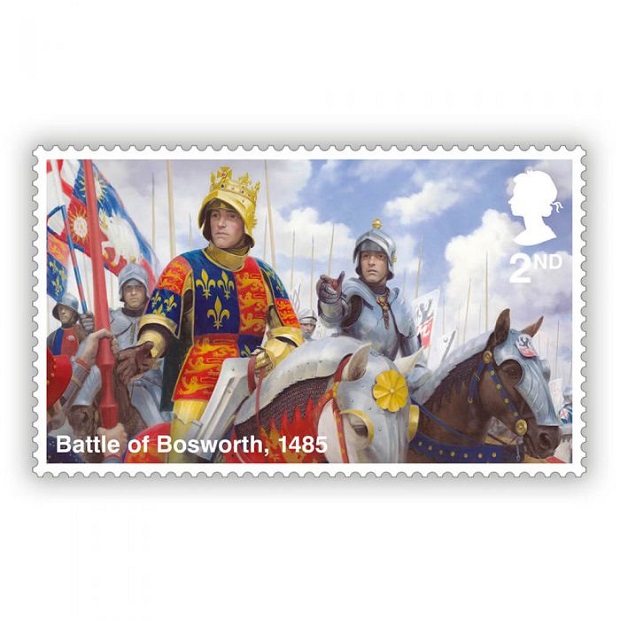 The site of the battle at Bosworth was finally determined as a result of research and excavations led by Glenn Foard, Reader in Military Archaeology of the University of Huddersfield, who led a four-year project that tried, so far without success, to determine the precise location of the Battle of Barnet. 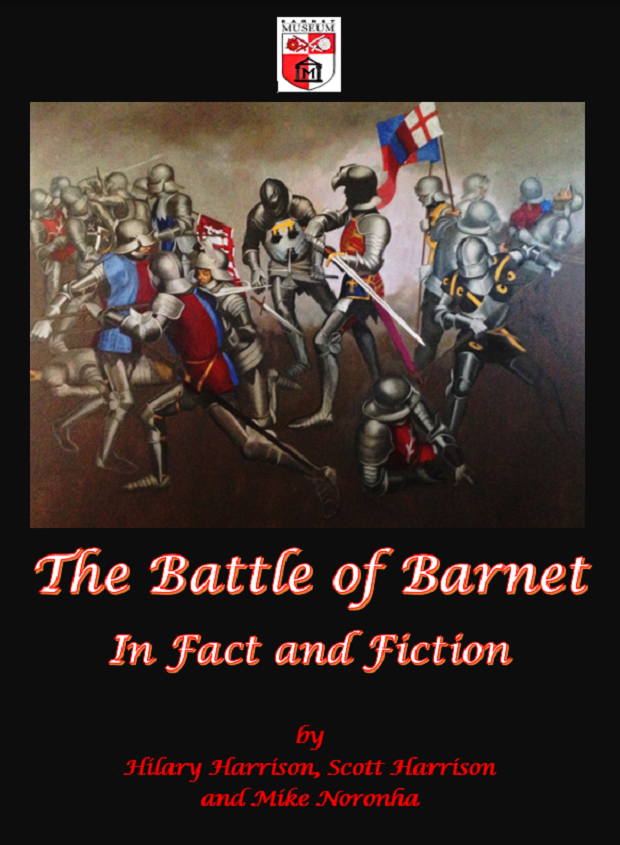 A new book on Barnet’s place in the Wars or the Roses – The Battle of Barnet in Fact and Fiction – by Hilary Harrison, Scott Harrison and Mike Noronha has just been published by Barnet Museum.