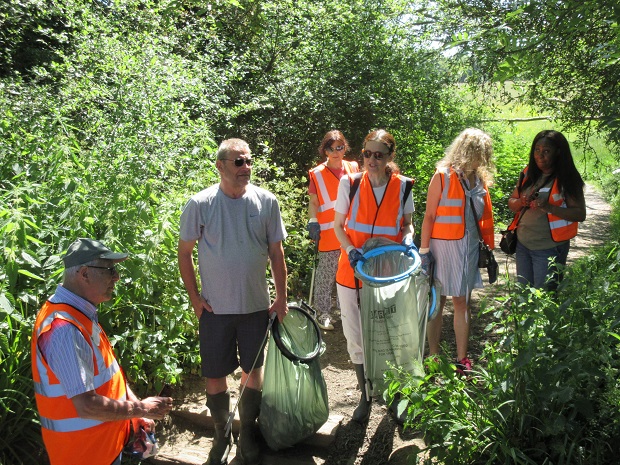 Evidence of a fresh sewage spill in Dollis Brook was an unexpected - and unpleasant - find when the DollisBrookers carried out their first litter pick along Barnet's Dollis Valley Greenwalk.

On hand to inspect the pollution was the Chipping Barnet MP, Theresa Villiers (centre) who was one of 20-plus volunteers who spent the morning (13.6.2021) clearing litter and rubbish from the greensward and paths beside the brook.

She assured the volunteers that she would report the spill to the three relevant authorities – Barnet Council, Thames Water, and the Environment Agency – in the hope that action can be taken. 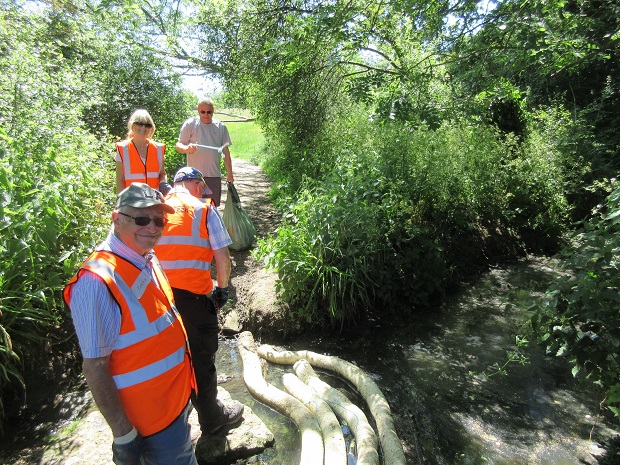 Jeffrey Newman (left), the inspiration behind the formation of the DollisBrookers, inspected booms that had been laid across the brook to stem the flow of sewage and prevent further pollution downstream.

“This is just another illustration of the importance of monitoring the brook. The smell from this spill is terrible and quite unacceptable.

“We will have to establish a sewage watch group so that we can keep an eye out for spillages like this and get them stopped,” said Mr Newman (far left).

He was supported by Chris Adams, who lives in Leeside, off May’s Lane, who said there had been frequent sewage discharges into the brook last year but this latest incident – with booms laid across the brook by the stepping-stones close to the Dollis Valley estate – was the first he had seen in recent months.

“Last year we worked out that the spills were starting higher up the brook, close to Southfields, off Mays Lane.

“Barnet Council couldn’t decide out what had happened, but it seems some foul sewerage connections, perhaps in new houses, have been linked up to storm drains and these spills can happen.” 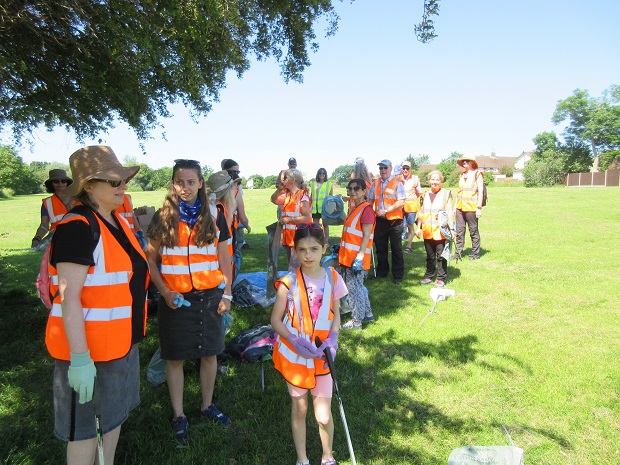 The litter pick along the Dollis Valley Greenwalk was the fourth organised by the DollisBrookers, who were established initially to improve the environmental attraction of the brook as it passes through Finchley.

“This is our first visit higher up the brook and High Barnet is so lucky to have a marvellous stretch of countryside like the Dollis Valley Greenwalk,” said one of the group’s founders Natasha Bennett.

Ms Bennett welcomed the volunteers as they assembled at the end of Leeside as they collected their green sacks, litter picks and high-vis jackets.

Theresa Villiers told the Barnet Society that she had been determined the support the litter-picking initiative because litter and fly tipping along the green walk and the banks of the brook was a problem.

Another unexpected find was an abandoned motorcycle. 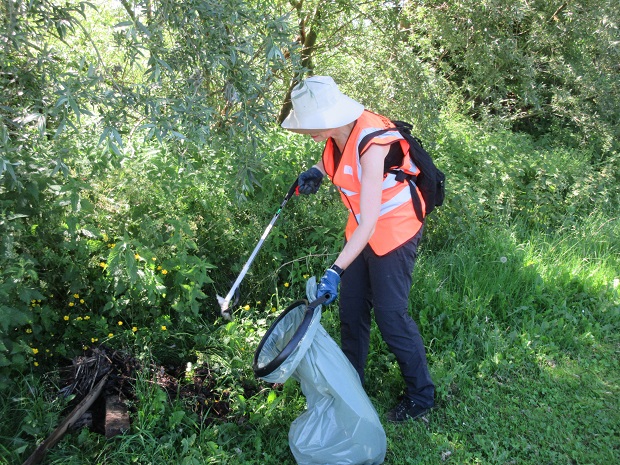 Lucy Bridgers, founder of the High Living website, which provides an online guide to Chipping Barnet, tackled a heap of garden rubbish tipped into the grass beside the walk.

Among the detritus was an array of flowerpots and plastic bags.