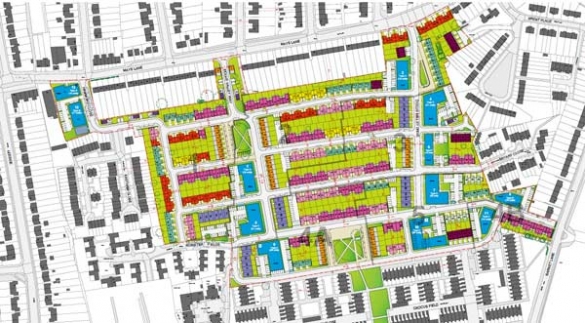 Proposals for the phased redevelopment of the Dollis Valley estate are advancing.  The overall development will be in five phases, spread over a period of about five years.  There will eventually be approximately 630 new homes of which some 390 will be for sale, including intermediate sale, and at least 230 rented.

The development is predominantly 2- and 3-storey with a few 4- and 5-storey blocks of flats. The third storey of 3-storey houses is accommodated within a crown roof to maintain a uniform roof line.  Half of the dwellings will be traditional houses including seventy-two 4-bedroom houses.  Two new vehicular accesses from Mays Lane will help to better integrate the estate into the surrounding area.

Apartment buildings - the taller buildings – line the two north-south avenues which will be tree-lined while two 5-storey apartment blocks of individual designs are located as focal points at the end of the avenues.

Houses will be mainly in four east-west cross streets. ight different house types are mixed in short runs within each street to provide a variety of building shapes.

Many of the houses have balconies. The primary façade material will be brick with small areas lined in timber including balconies and porches.  All houses have small back gardens and narrow front garden strips are planned to be planted with hedges which, combined with the planting of small trees, are intended to create a “garden suburb” feel.

The largest community open space will be at the southern edge of the site where it will link, through the existing housing estate, into the Dollis Valley Green Belt.

It will include a hard landscaped area that can be used for community events.  Three small playgrounds will be provided within the development.

A community facility on the Mayes Lane frontage will accommodate the activities that currently operate in the Rainbow Centre, Valley Centre and the existing community space on Mayes Lane.  The intention is that this will serve the wider Underhill community rather than being perceived to belong to “the estate”.

The first phase of development will be on the site of the disused school, allowing residents to be ‘decanted’ to free-up buildings for the subsequent phase.  A public consultation will take place in September and it is envisaged that planning applications (outline for the whole scheme and detailed for Phase 1) will be submitted in October.