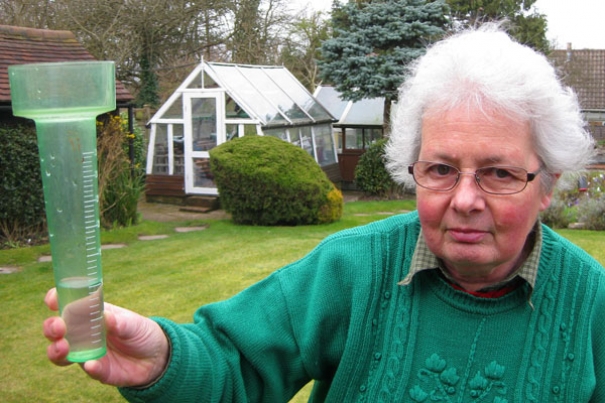 Angela Morris inspecting her rain gauge.
After collecting High Barnet’s rainfall figures since the 1980s, a Barnet family can say without hesitation that this winter has been the wettest locally for at least thirty years.

Angela and Peter Morris of King’s Road say their gauge recorded 219 mm of rain in January and 116.6mm in February.  According to their records, the average January rainfall has been 73.5 mm, with 51mm in February.

Angela Morris said her mother Noreen began keeping arecord of the daily rainfall and temperature in January 1981 and after her death she and her brother, who are both members of the Barnet Society, have kept their records up to date.

The highest daily rain fall this winter for a twenty four hour period was 33mm on 6/7 February  – a figure equalled only once, on 9/10 February, 2009.

The coldest night they have recorded in their north-facing garden was 12 February 2012 when temperature fell to 15.6 Fahrenheit; the day time temperature that day was 32 Fahrenheit.