Was this rare early film shot in Barnet? Featured 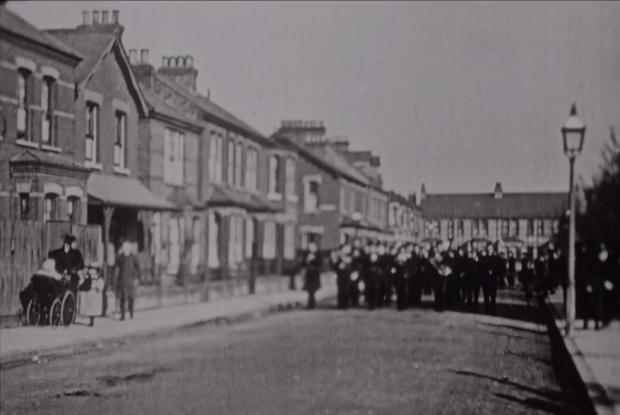 Birt Acres, a key figure in the invention of British movies, lived and worked in Chipping Barnet. His 1897 short Band Marching down a Street is one of very few to survive from the earliest days of film. Local history investigation has convinced me that it was shot in Stapylton Road.

In March 1895, 125 years ago, Acres made probably the first British motion picture outside his house in Park Road, using a camera of his own making. On the back of that success, he quit his job as manager of a photo printing company and set up the Northern Photographic Works behind Barnet High Street to make revolutionary movie cameras, projectors and films.

To appreciate his significance, some context is important. Thomas Edison had started showing movies in America in 1894, but they could only be viewed via his Kinetoscope, a box with a single peep-hole. And in France, the Lumière brothers first projected a motion picture in the same month as Acres’ home movie, but their first public showing didn’t take place until December 1895.

A year or so later, Acres made Band Marching down a Street, a 25-second clip of a military band marching towards and past the camera. It’s grainy, jerky and partly out of focus, but it’s one of only a handful of films that survive from that pioneering era. It’s now in the British Film Institute archives, but can be viewed free here.

“Is the street in this film identifiable as a place in Barnet?”

That was the question early film historian Peter Domankiewicz asked me recently. I’d met Peter last year at a BFI seminar on early British movie-makers. To complicate the challenge, it was possible that the film had been flipped left to right.

The starting point for my detective-work was the streetscape, which comprises a wide road with, on one side, a long row of mainly terraced houses and, on the opposite side, trees. In the distance is another terrace at right angles to it forming a T-junction. Buildings resembling them can be found around High Barnet and New Barnet, but I couldn’t identify a street that matched the one in the movie.

So I turned to the 1896 Ordnance Survey map of Barnet.

The only streets on it that form a T-junction open on one side are Stapylton Road and Strafford Road. They’re also visible in a grainy 1910 aerial view of the spot (below) in The Barnets & Hadley, a book of old photographs published by Barnet & District Local History Society. (I’ve circled it in blue. Please take my word – the scan doesn't do it justice.) 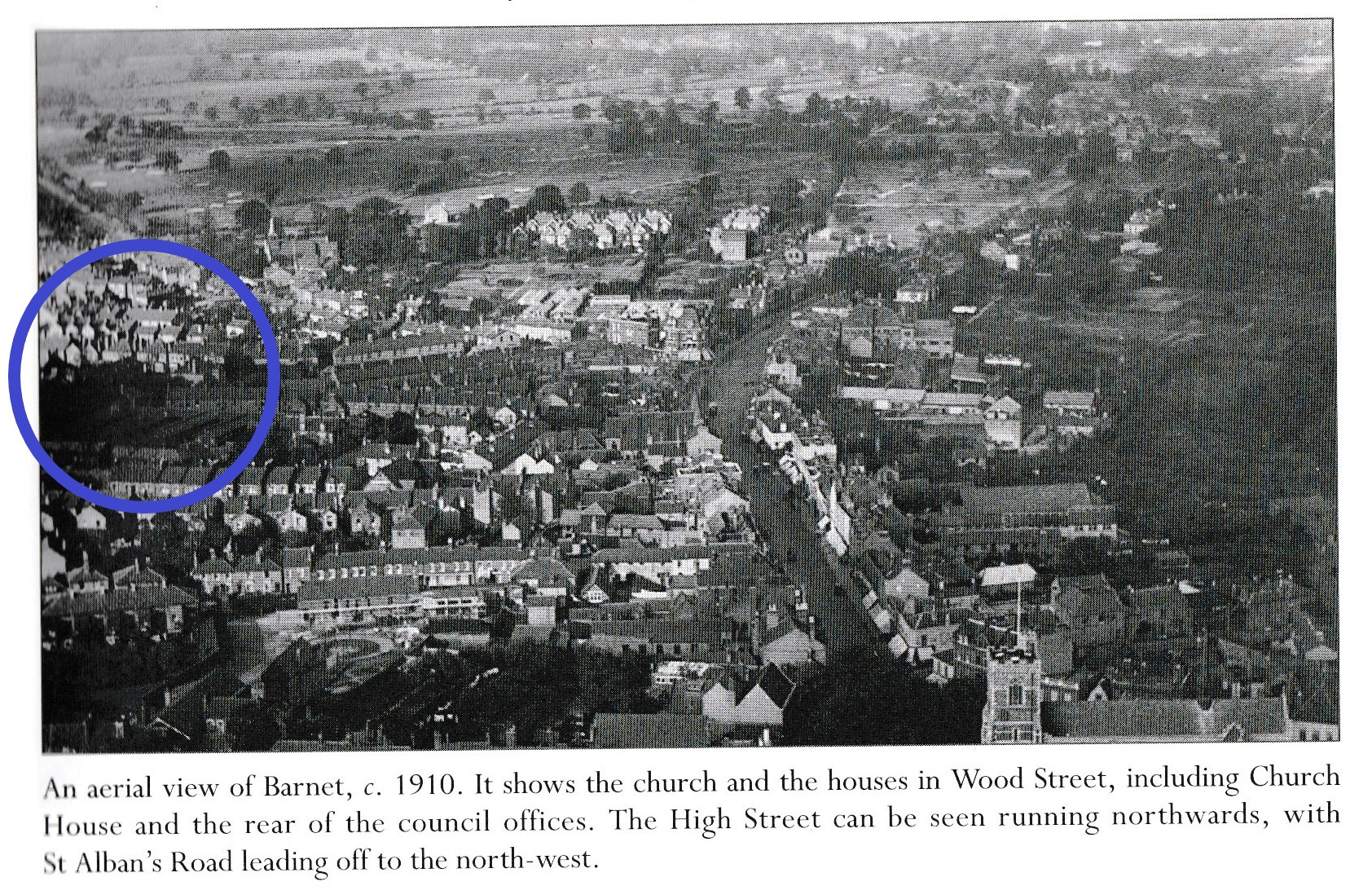 Today there’s no longer a T-junction, because in the 1980s Stapylton Road was extended to St Albans Road. Both rows of houses in the film were pulled down, those on Stapylton Road’s west side being replaced by the Library and Ewen Hall.

But the map also shows, on the east side of Stapylton Road, a militia barracks which was the base of the 12th Rifle (Middlesex) Volunteers. It was on the site of the present multi-storey car-park. That would explain the troops. In the film, trees screen the barracks.

If I'm right, the film clip shows the scene correctly, i.e. with the band emerging from the barracks on the right (east) and marching south towards the camera. The shadows are consistent with that, indicating that the time is mid-morning. If it was Sunday, maybe the band was on its way to church parade at St John the Baptist's church – so it could be the same clip that film historian John Barnes referred to as Church Parade of Troops in The Beginnings of the Cinema in England, 1894-1901. If the film was shot in June 1897, the band could have been commemorating Queen Victoria’s Diamond Jubilee. 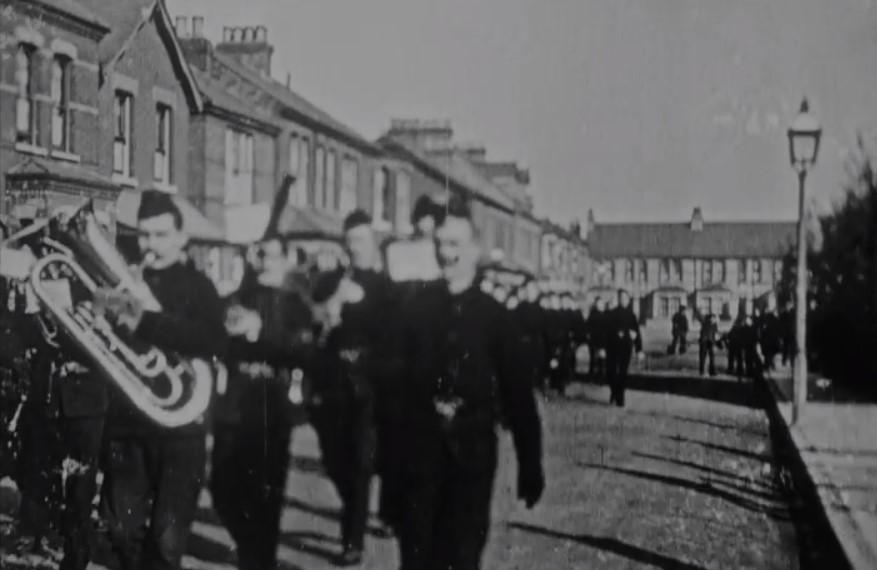 What seems to clinch my case is that in 1897 Acres lived at No.45 Salisbury Road – only a few metres from the scene. The band was probably a regular sight on the streets, at least on important national days. What more obvious subject for Acres to test his latest gizmo – possibly the Birtac camera/projector that he invented that year?

Below is the map annotated with the key locations I’ve mentioned. 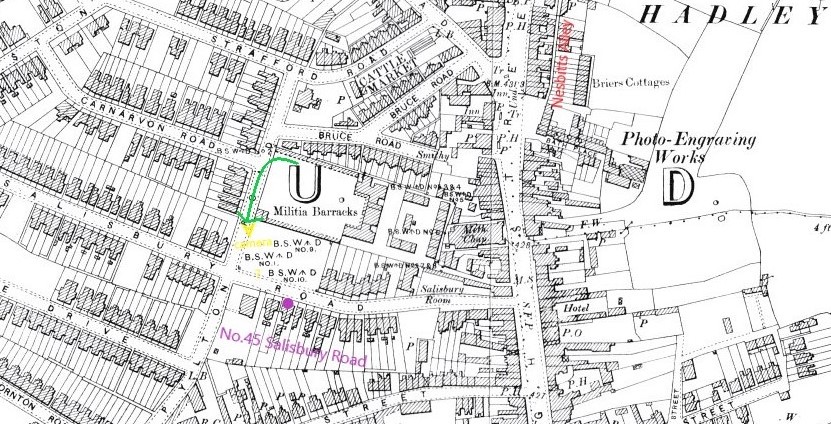 It also marks Nesbitt’s Alley, where Acres established his Northern Photographic Works. Thanks to Ray Peak, a former Barnet resident who remembers it from his boyhood, we know that the building was No.6; and it still exists, albeit much altered.

Some of Acres’ ground-breaking gadgetry survives in the safe keeping of Barnet Museum: as significant for Barnet – and national – history as a Battle of Barnet cannon. But we’ve yet to find one of the latter…

Since this article was published, Graham Willcocks has produced a postcard (below L) from the Terence Atkins collection in Barnet Museum archives that confirms that Marching Band was indeed filmed in Stapylton Road.

The house on the left in the 1920s postcard still stands on the corner of Salisbury Road, complete with original chimney pots (above R). The houses further down the road in the postcard are identical to those that appear in Marching Band, but have now gone, obliterated by a parachute mine that destroyed the area on 15 November 1940.

I'd like to record my gratitude to Graham and Barnet Local History Society for finding this missing piece of the jigsaw.

Below is a photograph of the 1940 bomb damage in the vicinity of The Spires bandstand, mentioned above and described in more detail by local historian Dennis Bird in his comment below. The photo is courtesy of Terry Goulding from Potters Bar Museum. 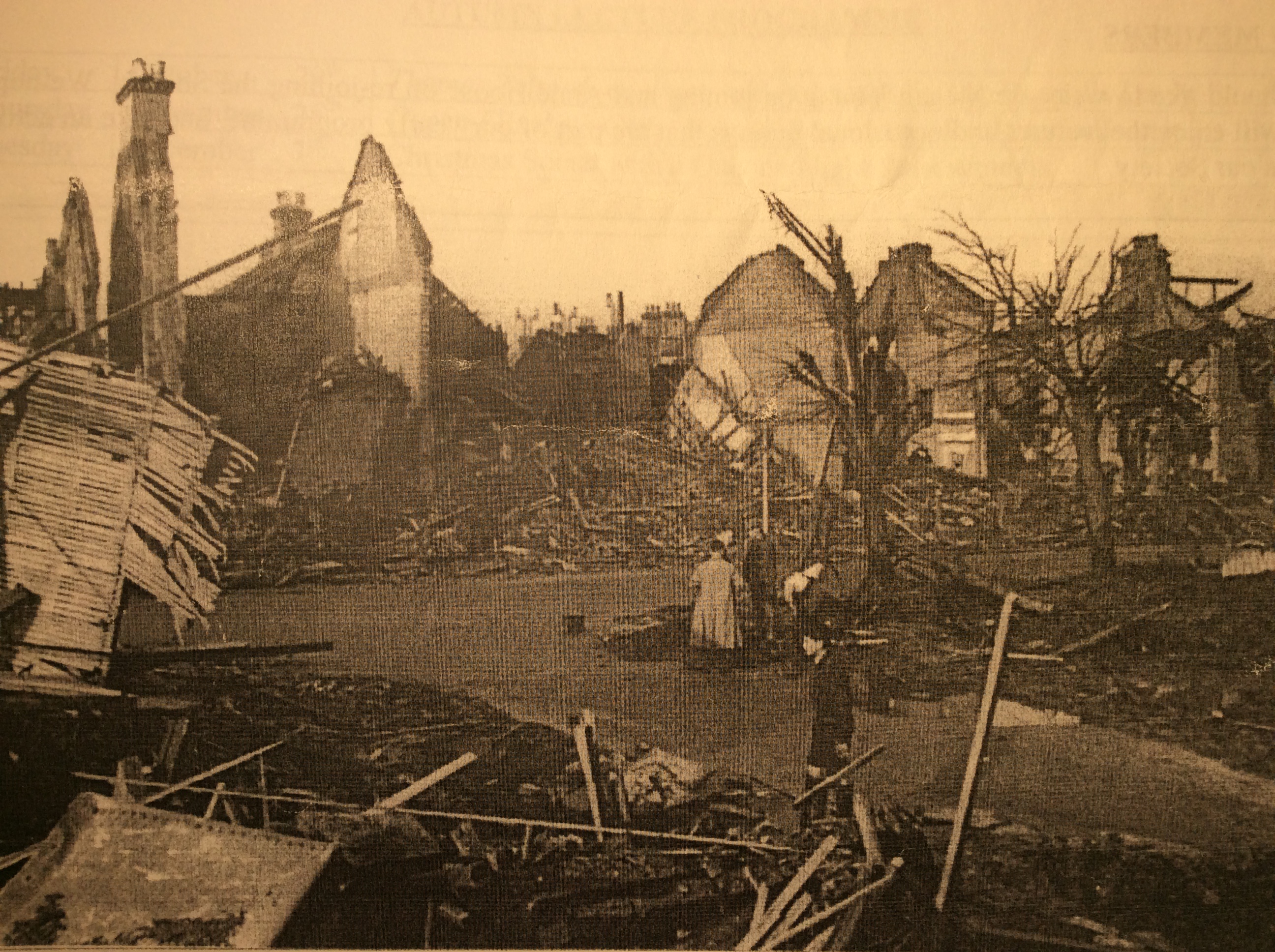 Published in Barnet History
More in this category: « Sporting history for Barnet rugby