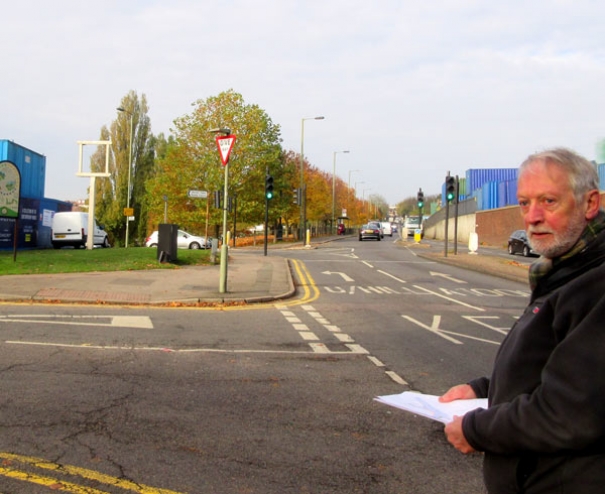 Robin Bishop beside the green space in front of the Old Red Lion public house where two additional trees would complete the row of trees that line Barnet Hill
Completing the majestic row of Norway Maple and London Plane trees that line Barnet Hill – and provide such a magnificent entrance to the town – might become possible following a generous donation to the Barnet Society.

If two trees were added to the green space in front of what was once the Old Red Lion public house, there would then be a continuous band of trees all the way up the hill from the Northern Line tube bridge almost to Bedford Avenue.

David Lee, the Society’s long-serving expert on tree planting and conservation, was the driving forces behind the original decision to plant trees on the grass slope alongside this stretch of the Great North Road, and presented his proposals to the Town Centre Forum in 1998.

Eighteen years later, Eamonn Rafferty, editor of the society’s newsletter, has made a generous donation in memory of his aunt May Finnerty, originally from Co. Fermanagh, who lived to be 95, and had many happy memories of Barnet from her time as a nurse in London during the Second World War.

Discussions are now to be held with Barnet Council to seek approval and to negotiate the cost of the additional tree planting. 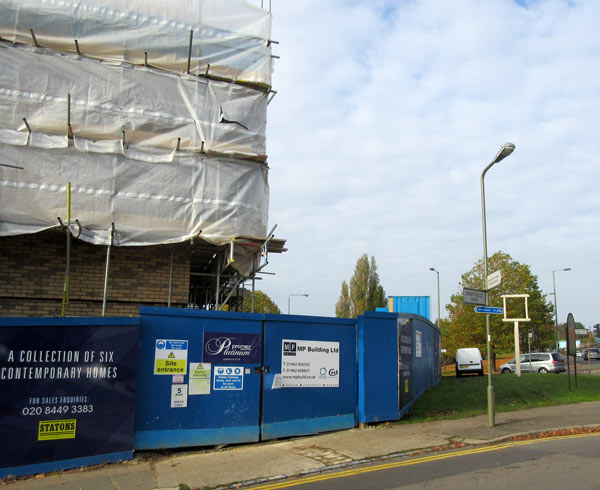 The green space immediately in front of the Old Red Lion – now being replaced with a block of six houses – is owned by Barnet Council, and is available for public use, so the tree planting could take place if the council agrees.

Robin Bishop, who leads the society’s planning and environment team, says the planting of two additional plane trees would link up the hillside row with the group by the bridge, and enhance the busy A1000/Fairfield Way/Underhill junction.

“We have already had preliminary discussions with the council’s green spaces and trees team, and as we are now in a position to contribute towards the cost, we hope we can work out the details.”

As the existing maple and plane trees planted 17 years ago continue to mature and fill out, they are transforming the approach to High Barnet.

When motorists, bus passengers and pedestrians along the Great North Road emerge from under the tube bridge, they see the trees stretching out ahead of them, all the way up what in its day was an amazing piece of civil engineering.

The long sloping incline on this stretch of the Great North Road is in fact an artificial causeway constructed by John McAdam in 1823-27, as part Thomas Telford’s upgrading of what was then the London-Holyhead Road.

The maple and plane trees that line Barnet Hill were planted in 1999, and a plaque says the row, known as “Lee’s trees, was planted to commemorate the millennium and was “inspired by David Lee of the Barnet Society”.

David Lee is hoping the additional planting goes ahead: “It would be wonderful if the gap in the long line could be filled in.

Eamonn Rafferty, in making his bequest, says he hopes the money can be used for the benefit of High Barnet and be in memory of his aunt. He thought planting “May’s trees” would be a fitting tribute.

My intention was always that, from the railway bridge to Hadley, the passer-by would never be out of sight of a tree.

“This included street trees from the former courthouse up the hill, enhanced by churchyard planting, and trees (in tubs if necessary) through the narrow part of the High Street.

The Mannar Ashes on Hadley Parade (subsequently planted by the council) are the top end of my original proposal.”

Eamonn Rafferty, in making his bequest, says he hopes the money can be used for the benefit of High Barnet and be in memory of his aunt.

He thought planting “May’s trees” would be a fitting tribute.