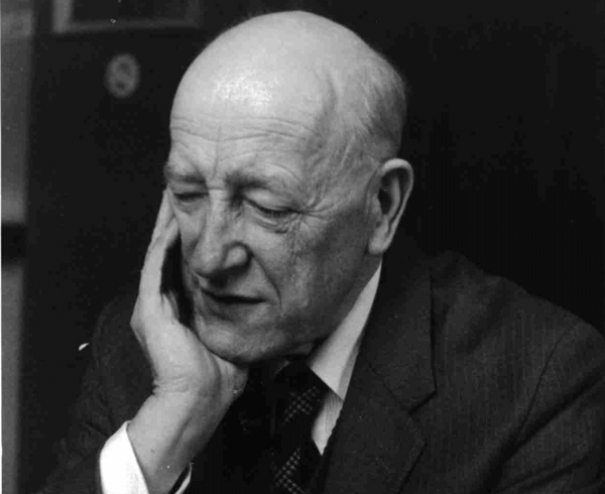 Eric Lucas, who died in 1996, author of the first Rambles Round Barnet published in 1948
After years of uncertainty answers have finally been found to questions about the identity and motives of an early pioneer in the continuing task of defending the footpaths and green spaces that mean so much to members of the Barnet Society.

“E H Lucas” was the author of the first known guide book for walkers who enjoy the countryside around High Barnet. It was published in 1948, and a copy resurfaced in the archives of Barnet Museum in 2001.

But apart from his surname and initials, his life and whereabouts remained a mystery despite extensive research by Owen Jones and David Ely, who followed “in the footsteps of E H Lucas” and who worked on the Barnet Society’s two Rambles Round Barnet guides published in 2012 and 2013.

We now know from the author’s son John Lucas, much more about his late father, Eric Lucas, who became treasurer of the Barnet Society, and who was asked in 1947 to report on the state of local footpaths after the Second World War.

Owen Jones, delighted to have some answers at last, takes up the story:

Eric Lucas, author of the first Rambles Round Barnet, was export sales manager for the Potters Bar toy manufacturer J L Randell whose products sold under the Merit label

Most Society members will be familiar with the 2 local walks guides, ‘Rambles Round Barnet’ that were published in 2012/3. The origin of the slightly quaint title is also probably well known. However, for newer members, the story begins with the efforts of the first Treasurer of the Society, a Mr E H Lucas, to survey the state of the local footpaths at the end of WW2. 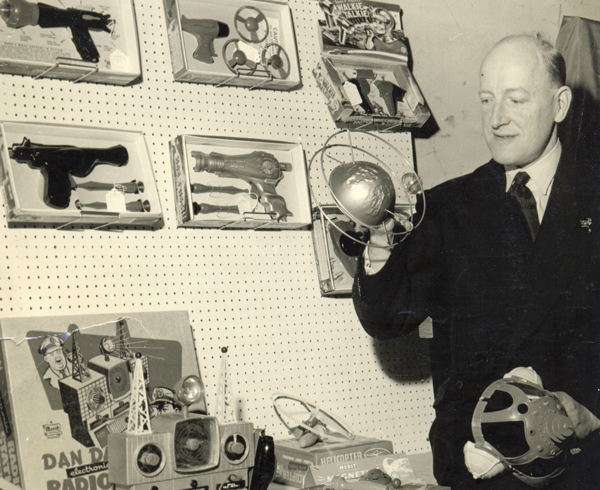 Eric Lucas at a trade exhibition between 1950 and 1965His detailed report was later written out as a walker’s guide to the local footpaths and sold in 1948 for 1 shilling (5p).

The story would probably have ended there had not Mrs Doreen Willcocks, a principal curator of the Barnet Museum, found a copy of this booklet in the Museum’s archives in 2002. Doreen’s husband, Peter, scanned its pages and then put these on a CD so that we could follow some of the routes that Mr Lucas took.

In 2012, the Society decided to commemorate the Diamond Jubilee of the Queen by publishing these contemporary versions of the walks.

David Ely, one of the primary authors of the booklets, had the inspired idea of including the sub-title ‘In the footsteps of E H Lucas’ on the cover of both volumes. Inevitably, we tried to find out something about the life of Mr Lucas that we could include in the booklets. Every trail ran cold almost immediately and we abandoned the search in 2013.

An article for the Barnet Society newsletter in 2006 speculated on whether or not Mr Lucas was a total abstainer or a secret drinker.

He never seemed to make more than a passing reference to any public houses en route.

This was unfair, as the authors of the contemporary guides made a point of taking the same approach themselves, knowing how the quality of a pub can change overnight following a change of manager and/or chef.

3 years later, just after Christmas 2016, Nick Jones, the Barnet Society Chairman, had an email from a Mr John Lucas.

He had been told of the ‘Rambles Round Barnet’ booklets by a friend who had realised that the ‘E H Lucas’ referred to on the cover page was John’s late father. John subsequently sent us details of the life of Eric Herbert Lucas.

Thus we learned of his earlier years and the family background when he wrote the original walks guidebook.

A fuller account of the life of Eric Lucas will appear in a subsequent article. From a rambler’s perspective, it was interesting to learn that Eric became a father for the first time in 1947 when John’s sister was born.

This was also the year when Eric walked those many miles checking out the post-war state of the local footpaths and then wrote his report.

Decency would preclude the suggestion that Eric might not have been too upset to escape from the house at this time had not John himself put forward the idea.

Readers of Part 1 of the current version of ‘Rambles Round Barnet’ will have noted that pubs are referred to in a paragraph headed ‘Parlours of Liquid Degradation’.

David explained that, for some, pubs are just waymarks to reassure us that we are still on the ‘straight and narrow’ of a route.

He also suggested that, for others, in this case both of us, they are destinations in their own right. John told us that his father was not a ‘pub person’ but did sometimes stop in a pub for food rather than drink.

The 2006 article concluded with the hope that, as Mr Lucas strolls along the celestial footpaths, he is pleased to see the enduring benefits of all his efforts of over half a century ago.

We can only echo those thoughts now that almost 70 years have passed since this remarkable man first strode along the still-attractive footpaths so near to our town.