Are these developers having a laugh? 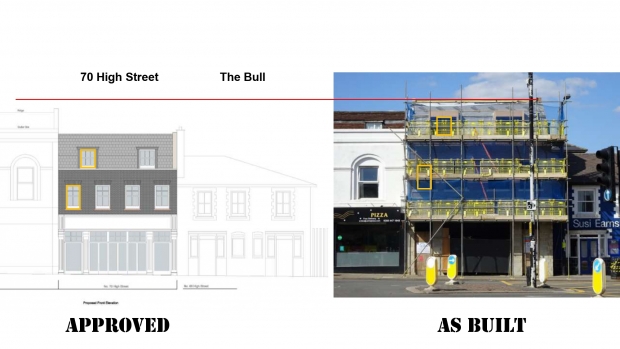 Two building projects under construction in Chipping Barnet’s Conservation Areas are flouting planning laws. They are tests of Barnet Council’s will to enforce its planning decisions.

They’re merely the most flagrant of numerous planning abuses that are gradually degrading our Conservation Areas. These are areas identified by the Council as having special architectural or historic interest which merits designation. Any alterations or additions must preserve or enhance the Area’s character or appearance, and require planning permission. And obviously, the completed building works should conform to the approved designs.

We’re lucky to have two Conservation Areas, Wood Street and Monken Hadley, one at each end of the High Street. Between them, they cover over a square mile. So they play a major part in defining the identity of Chipping Barnet. Even if we don’t actually live within one, their historic and aesthetic appeal is likely to have been one of the reasons we moved here, and why many of us wish to stay.

The two buildings featured here are quite different but both typical of our area: one on the High Street, the other in a suburban road. They deviate from their permitted designs in different ways: the first by building substantially higher than allowed, the second by an accumulation of small changes that together vitiate the quality of the original house. 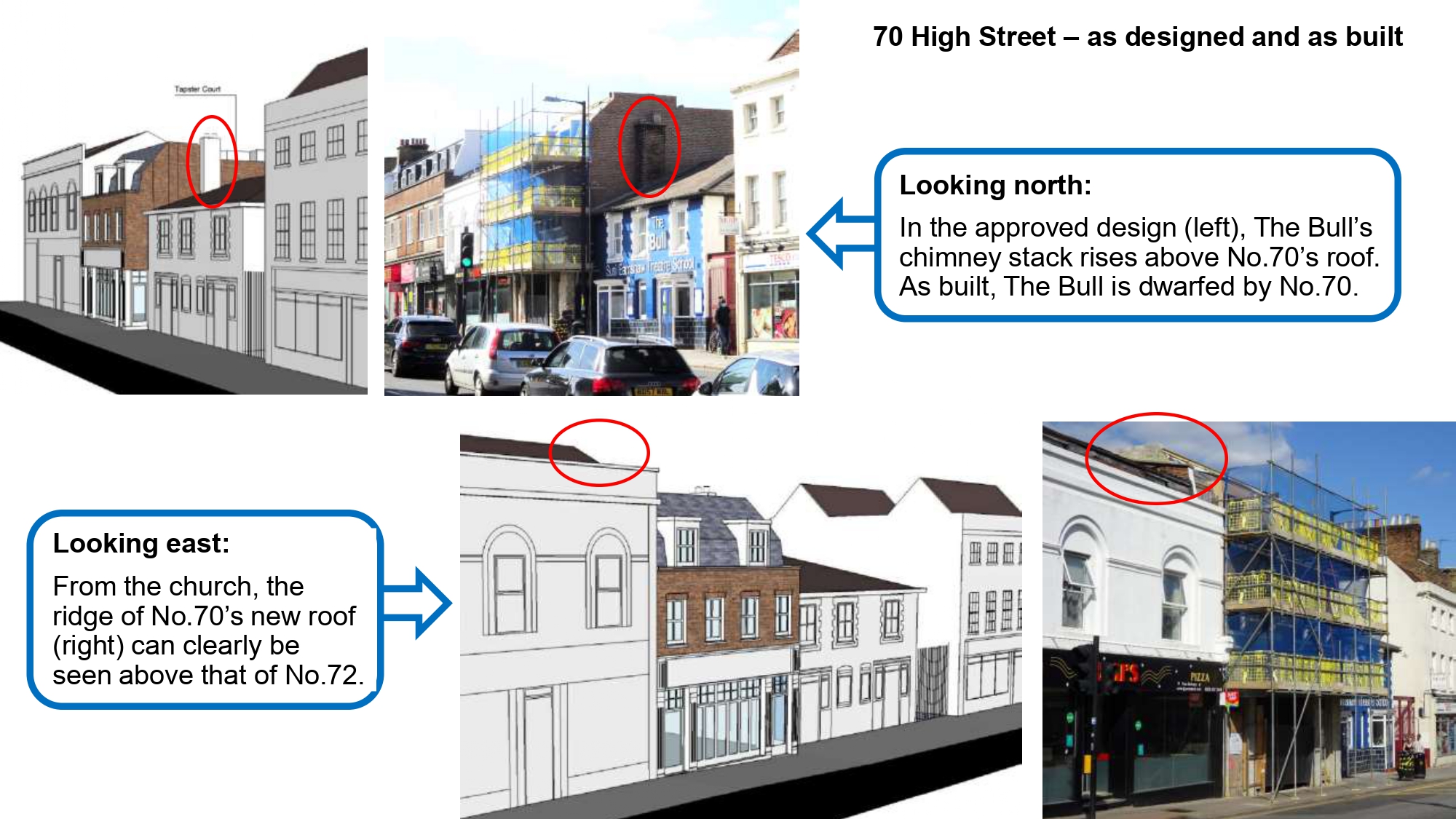 Next to The Bull and diagonally opposite St John the Baptist’s Church, readers may recall the After Office Hours bar (previously a shop) with a first floor and attic above. The building once had some historic features, but had been much altered externally and internally over the years. Nevertheless it fitted into the old High Street, and provided a nice transition from No.72, the three-storey building to its left, to the petite Bull to its right.

The site has seen a succession of planning applications. In 2014 one was submitted for 15 student bedsits in a four-storey building, but withdrawn. Later that year, another was made for 9 ‘studios’ and a flat, also on four storeys. The Barnet Society objected, and it was refused permission.

In 2015, application was made to replace the old building with a bar and two floors above (the top one within the roofspace) containing 7 ‘studios’. We supported it, albeit subject to several conditions. In July 2017, planning permission was granted on condition that work began within three years.

The old building was then demolished leaving a hole in the High Street, but for two years nothing happened on site except an archaeological investigation. This found artefacts and animal remains consistent with a former inn, though none seem to have been of special value or interest. In the absence of progress, last September Barnet planners served an Enforcement Notice to complete the building. Now it’s under construction – but is much higher than it should be.

Although the site is currently shrouded with scaffolding, a gross deviation from the approved design is plain: the roof is two-thirds of a storey higher than it should be. Instead of lining up with the cornice of No.72 High Street (as shown at the top of this page), its roofline actually exceeds that of No.72. And the windows, as well as being higher, seem to be wider than drawn.

Instead of forming a gentle step down from No.72 to The Bull, the new building actually steps up, presenting an ugly and overbearing flank to The Bull and the street. It’s unacceptable. 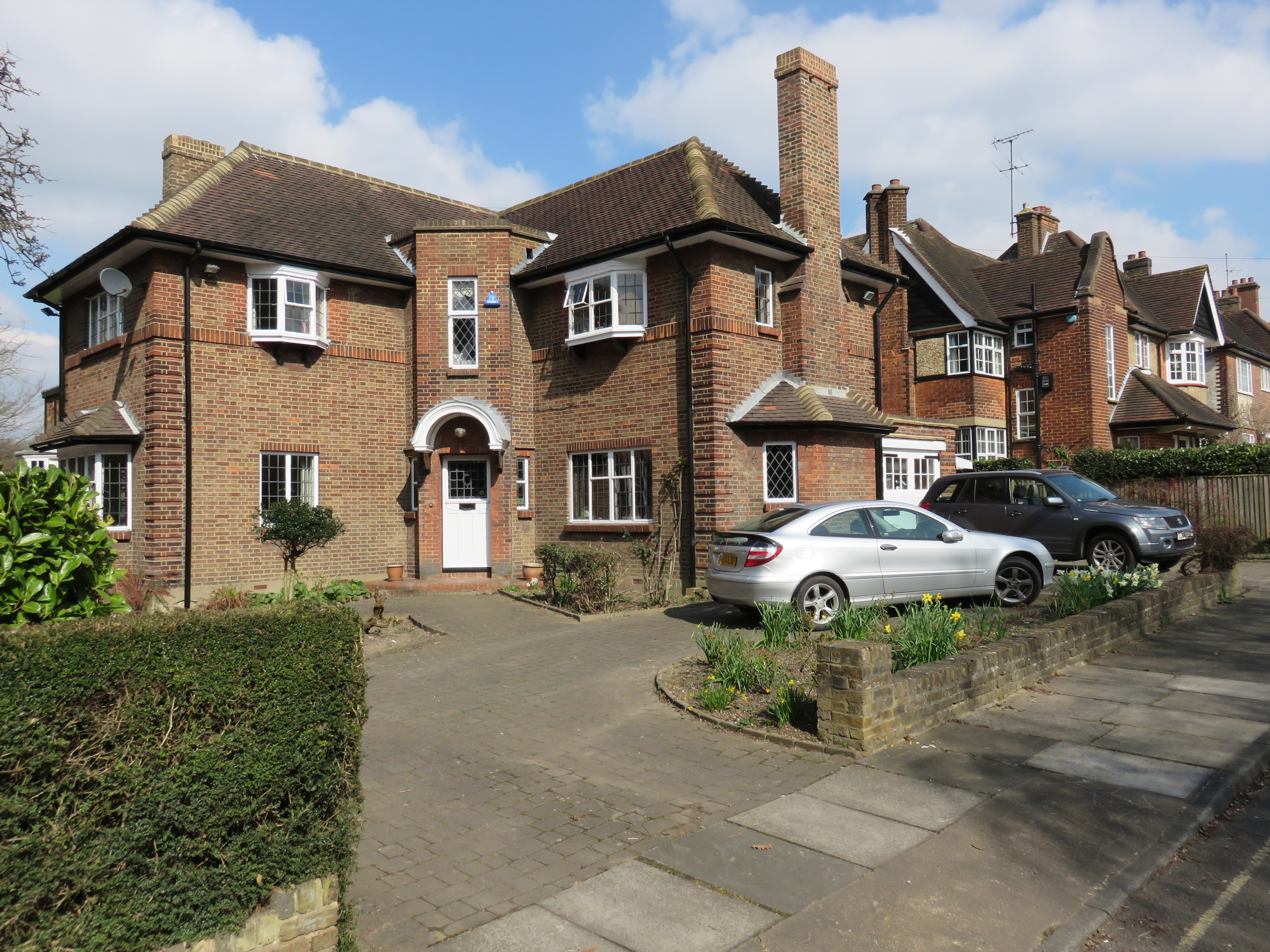 No.1 Sunset View was one of the best and most prominent houses in a road that is a North Barnet classic of garden suburb design, master-planned and largely designed by local architect William Charles Waymouth in the early 20th century. The houses are attractive variations on Arts and Crafts themes, and together comprise an unusually complete and high-quality development for its period. It’s an important part of the Monken Hadley Conservation Area.

The Barnet Society first became concerned about No.1 in 2017, when a planning application was submitted to make drastic alterations and additions. This received strong opposition from local residents and Society, and was withdrawn. We nominated the house for addition to the Council’s Schedule of Buildings of Local Architectural or Historic Interest to give it extra protection, and in July 2019 it was formally Listed. The Council’s citation draws attention to the “considerable variety of well-crafted brickwork, door and window details…unified by consistency of materials” and mentions its attached garage, something of a novelty in the early days of mass motoring.

In 2018 another application was made. Again we and local residents opposed it, and the Chipping Barnet Area Planning Committee refused it. Within a month a third application was submitted. Although less damaging than the previous two it was still strongly opposed, but this time the Committee approved it.

In spring 2019 work started on site, but we became concerned again in May when neighbours told us the roof tiles were being stripped off. Oddly, since traditional second-hand clay tiles are quite valuable, they were smashed and discarded.

In August unauthorised rooflights appeared. The planners responded by serving a Breach of Condition Notice. Over the next two months, the rear chimneys and balcony were demolished. Although the chimneys were later rebuilt, they were not exactly as before.

In February this year, the integral garage was rebuilt – but taller than before, and with a new window behind fake garage doors. New side windows were also revealed. Again, the planners issued Enforcement Notices. Although not Listed, the attractive Arts and Crafts interior was gutted.

In April the freestanding garage in the same style as the house was widened, and a modern up-an-over metal door replaced the original. In June the low brick boundary walls were replaced with higher ones, the front garden entirely covered with concrete paving blocks, and the front door replaced – none of them in materials or style faithful to the original.

Nor have these changes been made with planning consent, normally a requirement in Conservation Areas. Cumulatively, they’re seriously eroding the house’s original quality – not to mention intruding on the privacy of No.3 Sunset View.

Several Councillors have intervened, to little effect. The Planning Enforcement Manager agrees that there are issues and has been on the case for nearly a year, but the developer is blatantly ignoring Enforcement Notices. It’s not good enough. If the developer gets away with trashing a Locally Listed building in a Conservation Area, what hope is there of protecting others in future? 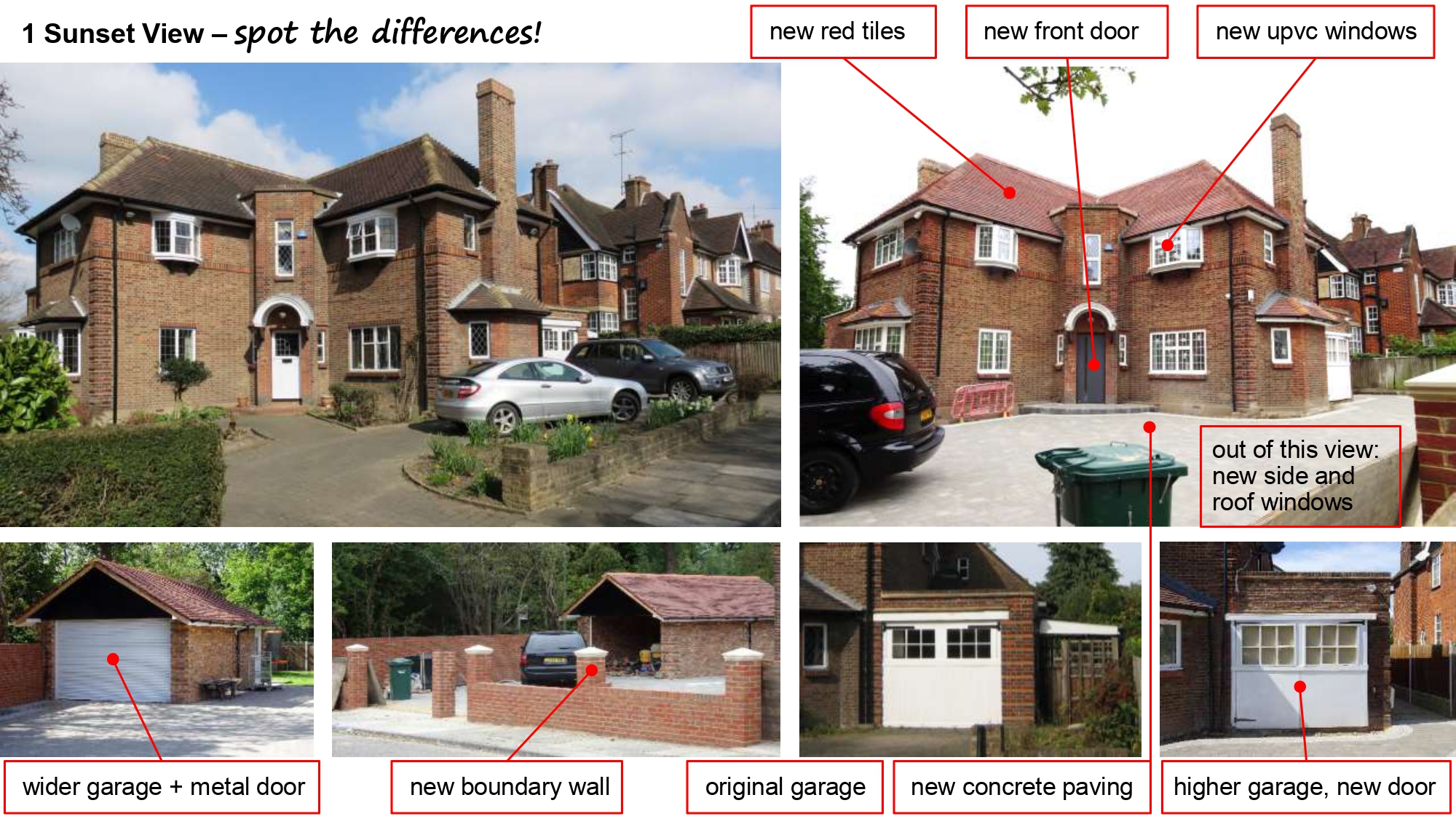 Planning enforcement is not easy. In the first six months of 2019 (the last period for which a report has been published) Barnet Council received 1,012 requests to investigate an alleged breach of planning control and issued 89 Enforcement Notices. Both statistics have been trending upwards in recent years.

In June 2018, Planning Magazine gave its award for Local Authority Planning Team of the Year to our Planning Enforcement team for (amongst other things) issuing more than eight per cent of all Enforcement Notices issued in England in 2016-17. In March 2019, the Local Government Chronicle recognised its innovative approach to service delivery. And according to the Ministry of Housing, Communities & Local Government, in the year ending June 2019 it served the second most Enforcement and Breach of Conditions notices in England. So it’s doing a lot right.

But the Enforcement team is small, and its authority is limited. As one officer puts it, “The powers of the planning department to prevent a breach of planning control are incredibly limited with the law clearly being designed to deal with breaches after they have occurred.” So it’s all the more important that cases for enforcement are selected for maximum effect.

The Planning judges praised “an enforcement team that has embraced the importance of service improvement in an unsung area of planning that is important to public faith in the system”. Too right. But unless Barnet planners make public examples of such conspicuous offences as 70 High Street and 1 Sunset View, prospects for our Conservation Areas are poor.

Published in Planning
More in this category: « Government announces further relaxations of planning controls – and the most radical reforms to the planning system in 75 years. Wall of opposition to plans for high-rise flats in New Barnet »