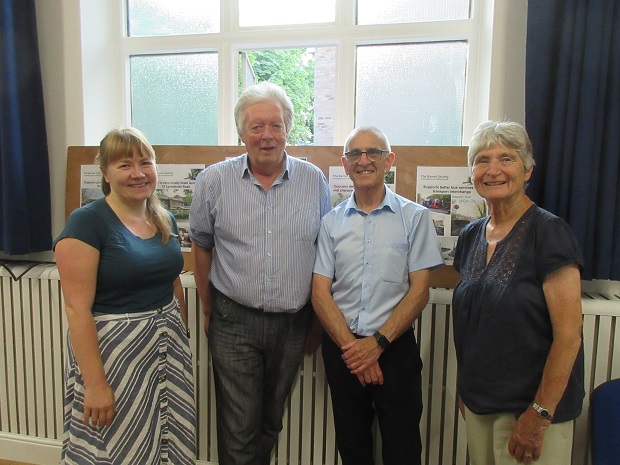 Barnet Council, now under Labour control, is intent on building a new relationship with the borough's residents to ensure improvements in key areas such as planning, public amenities, bus services and the protection of the Green Belt and open spaces.

Barry Rawlings, who became leader of the council after his party’s success in the May elections, told the annual meeting of the Barnet Society (23.6.2022) that he and his fellow Labour councillors were determined to take a new approach.

He announced a string of pledges and new initiatives:

Planning, currently outsourced to Capita, is to be brought back under council control.

There will be no building on the Green Belt or land open to the public.

Each ward will have a community safety officer to tackle crime and anti-social behaviour.

Park rangers will be hired to help people feel safer in parks and open spaces.

Transport for London will be urged to work with Barnet on improving bus services.

Councillor Rawlings (second from left above) was supported by the new Labour councillors for the High Barnet ward, Emma Whysall (far left) and Paul Edwards (second from right). They were welcomed by the society’s newly elected chair, Frances Wilson (far right).

A well-attended annual meeting – the first held in public for three years – produced a barrage of questions.

Councillor Rawlings set out the timetable for taking back control of planning which is currently outsourced to Capita, and which had clearly “gone wrong” in the last ten years.

When planning was back in house, as from August next year, the council will cease the practice of allowing developers to pay for pre-planning advice – a practice which one member of the audience feared had been encouraging over development and had been verging on “corruption”.

Councillor Rawlings said the practice of charging for pre-planning advice produced an annual surplus for the council of £4 million but it had to cease because Barnet had become a borough where “people don’t trust the planning department”.

Capita’s internal safeguards had not worked. They were not transparent or accountable and it appeared to the public that the council was acting on behalf of developers.

He was appalled at the size of the tower blocks that were being proposed: two tower blocks over 25 storeys in West Hendon, next to the Welsh Harp; a 28-storey tower block close to Colindale station; two blocks over 20 storeys high in Edgware.

“Personally, I am not happy with anything over 12 storeys in height.”

Councillor Rawlings began by explaining the council’s plans to have a community safety officer for each ward who would be responsible for tackling crime, anti-social behaviour, and problems such as fly tipping.

Ward councillors would walk round with residents and other representatives such as those from town teams to identify the issues of concern, where for example women and young girls did not feel safe crossing the road.

“We do hope community safety officers will make a difference.”

There would be the same community led approach over problems caused by buses in residential roads. Highways engineers would be asked to join residents to see what could be done.

His priority was to have a dialogue with Transport for London and meetings had been arranged for July and August when he would raise the vexed issue of the withdrawal of the 84 bus service from New Barnet to St Albans.

Hertfordshire County Council stepped in to subsidise a replacement service by Sullivan Buses from St Albans to Potters Bar, but there are now no direct buses between New Barnet and Potters Bar – which has isolated residents of Hadley and Monken Hadley with no service either to Barnet town centre or to Potters Bar.

Councillor Rawlings said he fully understood the anger of people in Barnet when day after day they saw a succession of out-of-service buses heading backwards and forwards to the Potters Bar bus garage using the very same route as the disbanded 84 service.

Councillor Paul Edwards assured the meeting that he was taking steps to address the concerns of residents of Salisbury Road, High Barnet, which is on the route 384 service – much to the anger of residents who think their road is unsuitable.

There had been meetings with TfL, the bus company and residents and he recognised that a road built in age of the horse and cart was not up to taking buses and lorries and that there were issues over subsidence in the road surface and in nearby properties.

“We have done something already, but a long-term solution is not easy, and it will cost a six-figure sum to replace that road surface. It an example of the challenges we face.”

Councillor Edwards’ pledge to have a conversation with residents and find solutions was supported by Councillor Whysall, who is a member of the council’s environment committee.

“We are happy to walk round with residents and see how we can make this a better borough.” 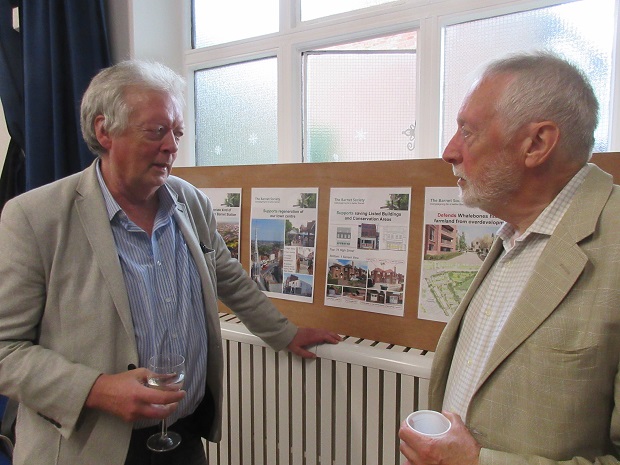 Much of the discussion revolved around policies in the green agenda – issues to be discussed at a new citizens’ assembly on climate change and biodiversity which was announced immediately after the election by Councillor Rawlings – seen here with Robin Bishop, who leads for the Barnet Society on planning and the environment.

The assembly’s role would be to scrutinise council policy and bring forward ideas to tackle the climate emergency. Barnet would have a bio-diversity officer who would help develop sustainable strategies for the borough.

Councillor Rawlings’ aim was to for Barnet’s Green Belt land and open spaces to be declared a regional park which would assist the council to obtain government grants and help provide enhanced public access.

There might be the chance in some parts of the borough to extend Metropolitan Open Land protection which would give the borough even more green space.

“We are hiring park rangers to go around our parks and who can concentrate on problems like anti-social behaviour. I think a ranger in uniform on duty in the parks will help people feel safer.”

He recognised there was a 25-year backlog in repairing pavements and footpaths, which he thought was partly due to Barnet having been overcharged by contractors.

Councillor Edwards, who was previously a ward councillor in Underhill, acknowledged the need for improved signposting for pedestrians and cyclists through the Dollis Valley and better clearance of rubbish from the brook.

Another of the initiatives discussed at the meeting was the plan to establish a youth parliament in Barnet that could assemble before council meetings and give an opinion on council policies.

A priority would be to see if the council could do more to reach out to young people, perhaps by developing an arts and culture strategy. Schools might be encouraged to start their own allotments to encourage an interest in sustainable food production.

Councillor Rawlings accepted he would be judged on his record: “In four years I hope to make Barnet more of a fun place to live, to be greener and more biodiverse.  I’m ready to have a go.”