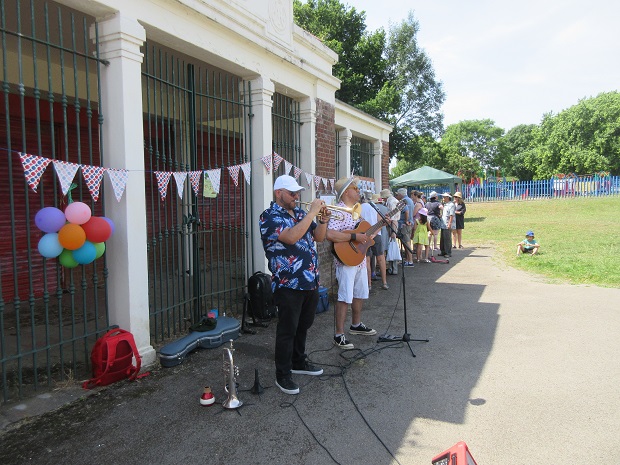 For the first time in a decade Tudor Park Pavilion was brought back to life hosting a Picnic for the Pavilion for the residents of Barnet Vale...well almost! Supporters of the campaign to refurbish the dilapidated pavilion could still only look in from the outside at what used to be a much-loved focal point for the community.

After it was closed and boarded up ten years ago, the dis-used pavilion has finally been earmarked by Barnet Council for restoration and the Big Picnic was organised to raise public awareness and to ensure the council presses on with the refurbishment.

A £200,000 award from the community infra-structure levy paid by developers has been set aside for the work.

Supporters of the Friends of Tudor Park and Pavilion were on hand to canvas ideas for the kind of facilities and amenities that local people most want to see on offer when the pavilion is re-opened. 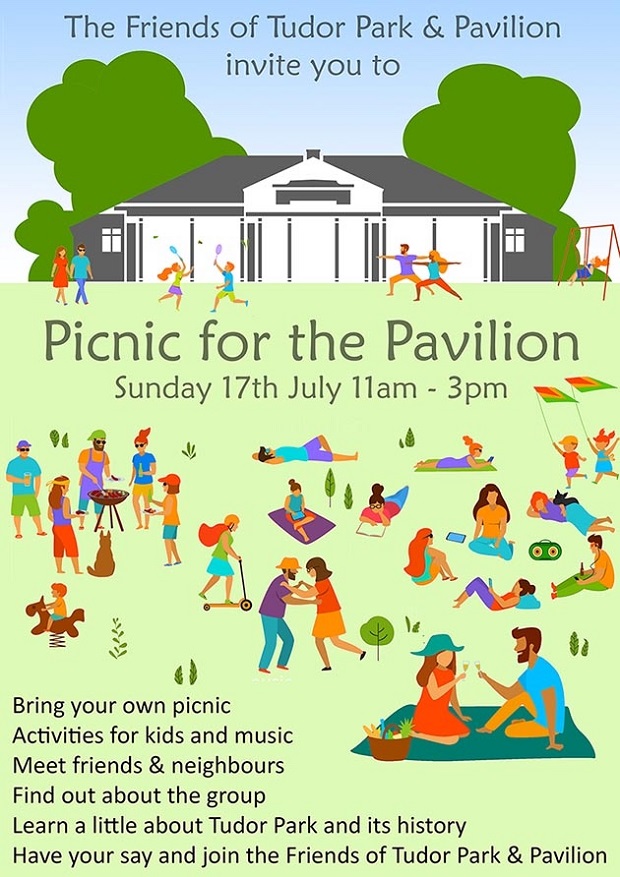 Organiser Simon Cohen, who a year ago started surveying local residents for their opinions on the pavilion’s re-use, was delighted by the turn out for the Big Picnic. 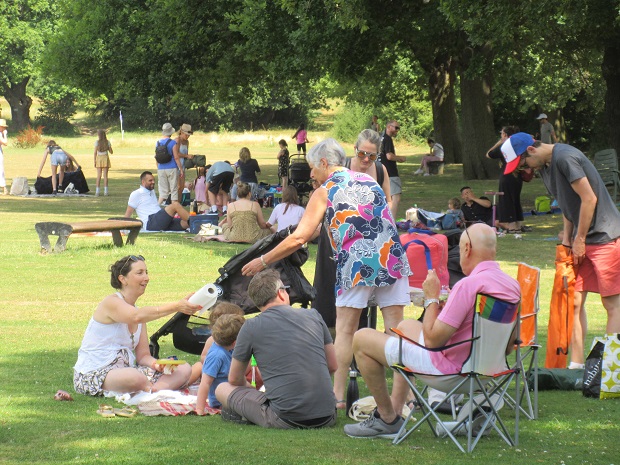 He was so pleased that the fine weather had encouraged families to have picnics under the many oak trees in Tudor Park. 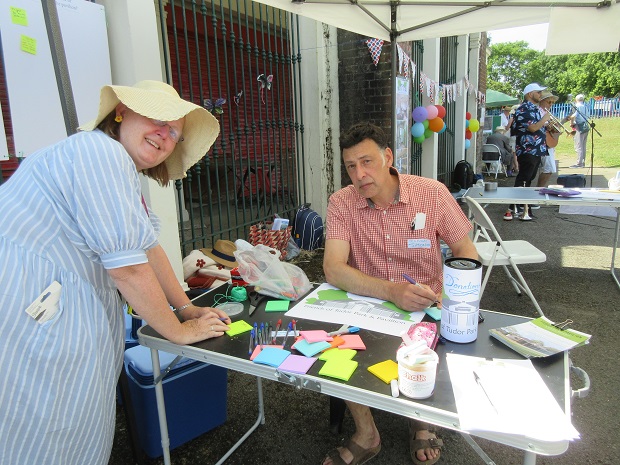 Mr Cohen – seen here with committee member Hilary Chamberlain – said they were still waiting for Barnet Council to send them details of a surveyor’s report setting out the extent of the repairs that were needed to the 102-year-old pavilion.

“Once we know what needs to be done – and we expect most of the £200,000 will be needed for basic repairs – we can then start fund raising so that we can install the facilities and amenities which people are calling for.

“Public toilets and a cafe are two of the choices that come out on top but there are all sorts of ideas for community use and re-opening the internal space would create loads of options.

“We are desperate to start work and plan the pavilion’s future so that it fits in with other plans for the park, such as the installation of new equipment in the children’s playground and possible opening of a sports bar at the Foot Golf course.” 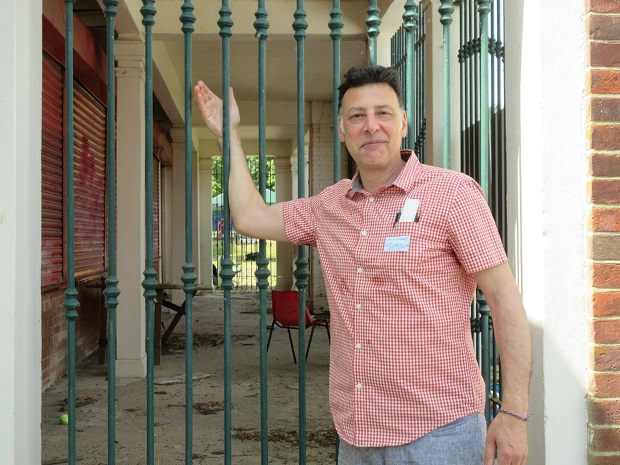 Mr Cohen said they had tried without success to persuade the council to let them use the pavilion’s veranda for the big picnic, but this was refused on health and safety grounds.

“We are determined to get the pavilion back into use, even if we have to chain ourselves to the railings!

“After waiting so long for the council to respond – and knowing that £200,000 is available for basic repairs – the community isn’t going to stand by and let this opportunity slip through our hands.” 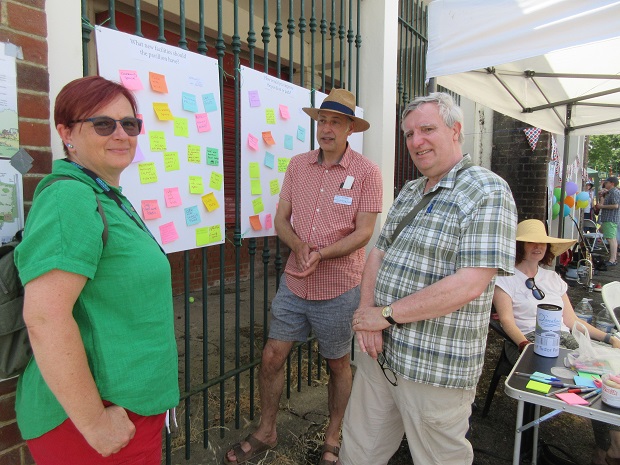 Two Barnet Vale councillors, Marianne Haylett and Richard Barnes, joined Mr Cohen in looking at the post-it notes on which residents had listed their choices for the facilities they would like to see in a refurbished pavilion.

Ms Haylett said the council’s controlling Labour group was very much in favour of the pavilion’s restoration.

“Barnet Vale lacks community spaces and facilities in what is a packed residential area.

“The strong local support is very encouraging. Lots ideas are coming forward and once the repair work has started, I am sure there will be even greater interest.”

Mr Barnes said it was a great shame that the pavilion had been sitting there unused for so long and getting increasingly dilapidated.

“The £200,000 from the infra-structure levy is ring fenced for the pavilion and given the pressure on council funds Tudor Park is very fortunate to have been granted this award.”

Picknickers were entertained by the group, The Cocobarros Duo – see above, Cristiano Assis (left) and Coco Barros – and the pavilion was decked out with illustrations of a refurbished pavilion and how it looked in the past. 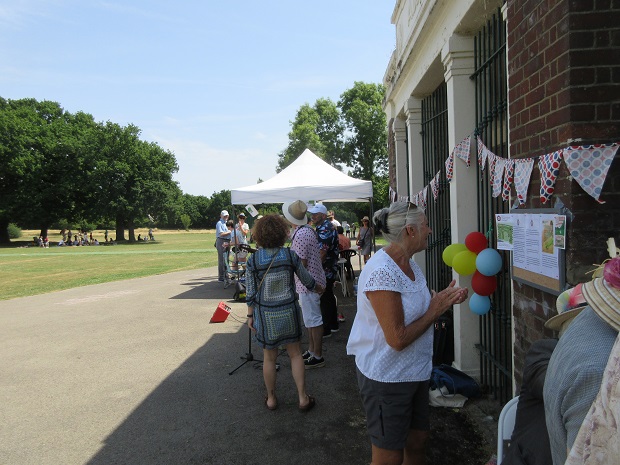 Originally the pavilion was part of the sports ground established for the employees of the New Barnet medical supplies manufacturer S Maw and Sons and its bears the logo S Maw along with the date 1920.

Early in 2020 it was included in Barnet Council’s local heritage list as being of historical and architectural interest because of its social and community value, age and rarity, and landmark qualities.

Architect Guy Braithwaite from the Barnet Society, which supports the restoration campaign, said the pavilion was a fine example of the neo-Georgian style which was still in fashion at the turn of the last century.

“The 1920s saw a late flowering of this classic style and the pavilion really is worthy of preservation.”

His support was echoed by Mr Cohen who said the building was such an important landmark in Barnet Vale.

“The sports ground, and pavilion was opened at the same time as many of the local houses were being built, so it would have been here just as people were into their new homes and we have to preserve and celebrate that link with the past.”