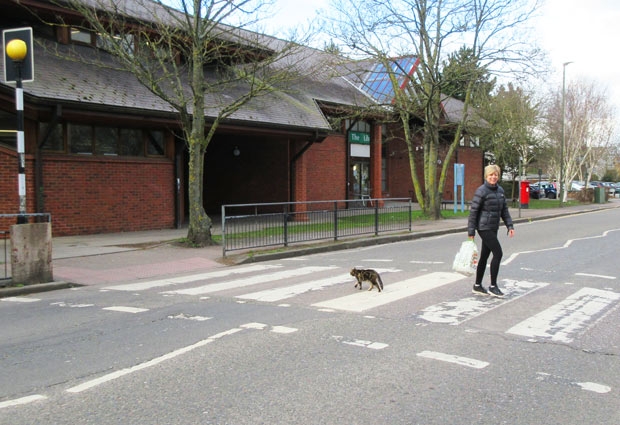 Safety-conscious Millie regularly stops the traffic at she uses the zebra crossing from Chipping Barnet Library to the Spires Shopping Centre
High Barnet’s most precocious feline – Millie, the 17-year-old tabby that has made a name for herself at the Spires shopping centre – is clocking up ever more online fans.

After being diagnosed by the vet as having a thyroid problem, Millie is now on medication and back to her usual self.

Millie’s owner, Paula Gabb, of Carnarvon Road, has been amazed by the number of friendly messages on Facebook and the Nextdoor community website. Millie already has three YouTube videos to her name.

“When I put up a post on Facebook to explain why Milly had been looking rather thin, she got 360 Likes,” said Ms Gabb.

“And when I said on Nextdoor that people should not feed Millie, because she had been having diarrhoea, I got 241 posts in support.”

Millie – clearly the nearest High Barnet has to an A list celebrity – is back again, courting her admirers as she waits outside Waitrose.

...I put up a post on Facebook to explain why Milly had been looking rather thin, she got 360 Likes...

In recent weeks she has been venturing further afield waiting in the High Street to greet shoppers a Harry’s the butchers or customers at the KFC Kentucky Fried Chicken restaurant.

Ms Gabb, who is busily writing Millie’s autobiography, said well wishers are always rescuing Millie when they see her in the High Street and take her back to her usual stamping ground outside Waitrose.

Millie was previously known as the library cat – where she regularly had an afternoon snooze – but then she mastered the walk over Stapylton Road, using the zebra pedestrian crossing, from the library to the Spires.

Motorists and passers-by stop in admiration when sets off across the zebra, stopping the traffic in the process.