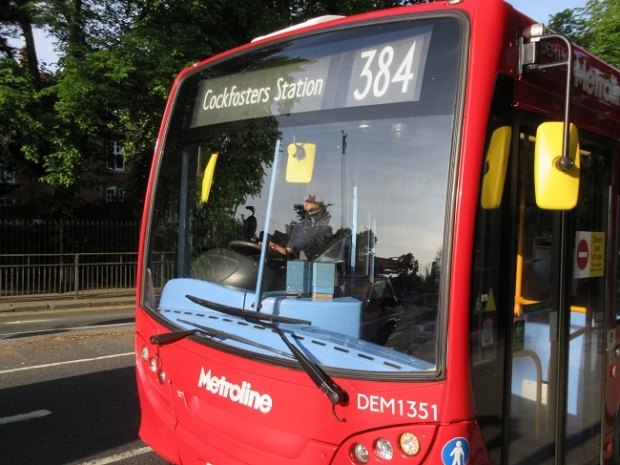 Transport for London's plan to extend the route of the 384 Cockfosters to High Barnet bus service to Edgware, via Arkley and Mill Hill (Apex Corner), is meeting strong opposition because it would take a more direct route and serve far fewer streets.

At present the 384 terminates at Quinta Drive, but TfL says there is demand for a direct bus service linking one side of the Borough of Barnet to the other.
By extending the route, TfL says it would be able to provide a direct link between Barnet Hospital and the town centre from Edgware and Mill Hill in the west as well as from Cockfosters and New Barnet to the east.
To maintain and improve running time, more use would be made of main roads.
Ten streets would no longer be served by the 384, including Strafford Road in High Barnet; Gloucester Road, Lyonsdown Road, Longmore Avenue and York Road in New Barnet; East Barnet Road, Brookhill Road and Crescent Road in East Barnet; and Castlewood Road and Northfield Road in Cockfosters.

A campaign opposing the withdrawal of the 384 service from so many residential roads is being organised by Joshua Yates through a Facebook page “Save the 384” bus route:
https://m.facebook.com/groups/238065826887767?view=permalink&id=521385878555759
Mr Yates, who is mobilising support from local councillors and organisations, says he thinks it appalling that TfL sneaked through this proposal in the middle of the coronavirus pandemic when previously a public meeting had been promised before any move was made to implement the new route.

His criticism of TfL’s timing has been supported by Robin Bishop, chair of the Barnet Society, who said it was a “sneaky decision”.
In evidence to Barnet Council’s draft transport strategy, the society strongly opposed the re-routing.
“To axe the 384 from outlying residential areas between High Barnet and Cockfosters tube stations is a perverse incentive to drivers when bus routes should be designed to minimise car travel.”

Details of the re-routing were announced by TfL on April 24 https://consultations.tfl.gov.uk/buses/route-384/ after a consultation process that began in September 2018 and was last updated in February last year.
TfL says there was supportive feedback for a quicker bus connection between New Barnet and Edgware although there was concern over the number of backroads that would be left unserved by a bus route.

There was also demand for a service connecting Edgware and Mill Hill to Barnet town centre, Barnet Hospital, New Barnet, and Cockfosters.
The extension of the route to Edgware bus station from Quinta Drive would be via Barnet Road, Barnet Way, Selvage Lane, Hale Lane, and Station Road. The route through New Barnet would be more direct, via Station Road, Victoria Road, Park Road and Edgeworth Road.
“Passenger numbers on route 384 are low and the service duplicates route 326 between East Barnet and Barnet town centre.
“Making the route more direct and extending it to Edgware would benefit a larger number of passengers who currently have to change buses to get across the borough.”

Other advantages of the re-routing would be the creation of a direct link between the town centre, New Barnet, the Jewish Community Secondary School and Cockfosters. The new route would provide additional capacity at the busiest points on routes 107 and 292.
Through his Facebook campaign to promote opposition to the 384 re-routing, Mr Yates is hoping to put pressure on TfL to reconsider its plans and says he has the backing of Theresa Villiers, MP for Chipping Barnet, London Assembly member Andrew Dismore and numerous Barnet councillors.
“We believe there is still time to force TfL to change its mind. Vehicle testing of the new route is not even scheduled until September and no date has been announced for the implementation of these changes.
“We were promised a public meeting in 2018 when these changes were first proposed and we still hope, despite the difficulties over coronavirus, that it might be possible for further discussions with campaigners and councillors.
“While the idea of a bus service direct to Edgware has always been largely welcomed, we say it should not be done at the expense of withdrawing the service from roads that have been served by a bus route since the 1990s. That would be too high a price to pay.

“The 384 is a vital service for a cluster of small communities which have already suffered through the reduction of the service from four buses an hour to three – which perhaps explains why TfL is now trying to argue that passenger numbers on the 384 are low.”
The withdrawal of the 384 from Strafford Road and the re-routing of the service along the entire length of Salisbury Road (not just the High Street end) is fiercely opposed by Salisbury Road residents.

Leah Taub, who helped organise a petition that attracted signatures from 80 Salisbury Road residents, said the section between Stapylton Road and Alston Road was much narrower than Strafford Road and entirely unsuitable to buses.
“Because of parking, delivery lorries often get stuck and traffic backs up causing congestion at the junctions with Stapylton Road and Alston Road. They are already hazardous, and this will only get worse if it become a bus route.”