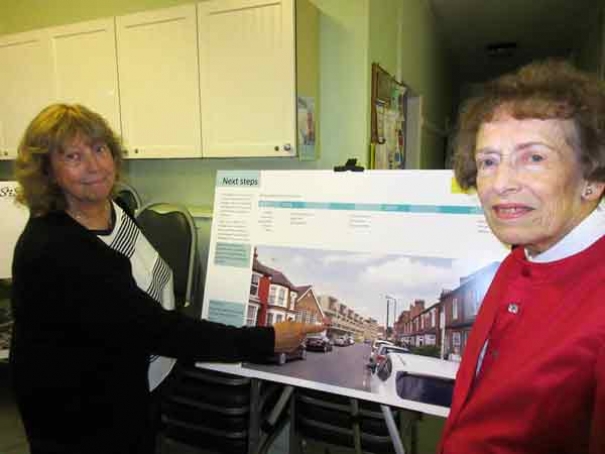 Christine Pugh (left) and Jean Broadhurst get their first chance to see the block of flats that is planned to take the place of the Fern Room in Salisbury Road
Barnet Old People’s Welfare committee fears that the demolition of the Fern Room, its day centre in Salisbury Road, to make way for a block of ten flats might well force the closure of a group that has been providing activities for Barnet’s elderly resident for the last 75 years.

SAS Investments, which purchased the Fern Room in May this year, is promising that its new development will include new community space, but the welfare committee doubts whether it will be able to afford the rent of the new and enlarged facilities.

Plans for a three-storey block of flats were unveiled at an open evening for local residents when the company presented an artist’s impression on the new-look Salisbury Road and directors explained their plans to redevelop the site.

The Fern Room is a very dilapidated, inefficient building...

“The Fern Room is a very dilapidated, inefficient building but we do respect the long-standing community use of the Salisbury Road site, and we are anxious to work with local groups, and especially the Old People’s Welfare Committee, to provide a new and much larger community space,” said Tim Jackson, director of SAS Investments.

An application for planning permission is likely to be made before the end of the year, and if approved the company would hope to start construction at the of end of 2018 or early 2019.

On seeing the plans for the first time, Christine Pugh, Chair of the welfare committee, agreed that the new building would sit quite nicely in Salisbury Road, but she feared the much larger-community space would command rents far higher than their existing much smaller one-storey building.

Her concern was shared by Jean Broadhurst, the committee secretary, who feared the demolition of the Fern Room might force the closure of their day centre, which is open six days a week; holds coffee mornings; offers a social advice centre for the elderly; organises evergreen clubs and outings in a minibus to other activities.

I am heartbroken to think the Fern Room is going to be demolished. It could be the end of us

“I am heartbroken to think the Fern Room is going to be demolished. It could be the end of us.

“We have had great difficulty in recent years getting volunteers and it has not been helped because the ownership of the Fern Room has changed so frequently. We have been unable to get a permanent lease and that makes it very difficult for voluntary groups to get additional funding.”

Ms Broadhurst said ownership of the Fern Room has changed four times since 2009 having been sold by Barnet Council to the developers of the Spires Shopping Centre and then passed on through the ownership of UBS, the William Pears Group, Hunter Asset Management, and then sold finally to SAS Investments in May this year for redevelopment.

As present the committee pays a rent of £875 a quarter to rent the Fern Room, but she doubted whether they would be able to afford a long lease on the new community space, given its size and the wish of SAS Investments to open up the building for greater use by local organisations.

Mr Jackson confirmed that SAS Investments was anxious to widen the access to the community space, perhaps opening it up to sports activities in the evenings, such as 5-a-side football. Rents for hiring the space would not be prohibitive, he said.

“We do respect the need to offer a replacement community space within our redevelopment, and we are being sensitive about this redevelopment, proposing ten flats, when perhaps 15 to 20 might have been squeezed into the site. We will provide affordable housing, we hope for first time buyers.”

Mr Jackson pointed to the company’s redevelopment of the Green Mann public house site in Muswell Hill where SAS had built three blocks containing 22 flats and six houses, but also provided community space that was going to be utilised by the London borough of Haringey.

The Muswell Hill development, named the Pinnacle, was highly commended in a recent Sunday Times housing award, and Mr Jackson had high hope for the reaction to the block to be built in Salisbury Road,

Jonathan Plant, the architect, said his design built on the unusual lay out of Salisbury Road where the Victorian houses were stepped back from the road. “Our plan for the new block is a contemporary design with a similar stepping in the facades to complement the Victorian houses.

This design does not conflict either with another fine building next door, The Stable, and we hope the care we have taken will be appreciated by local residents.”