Standing room only for church re-opening 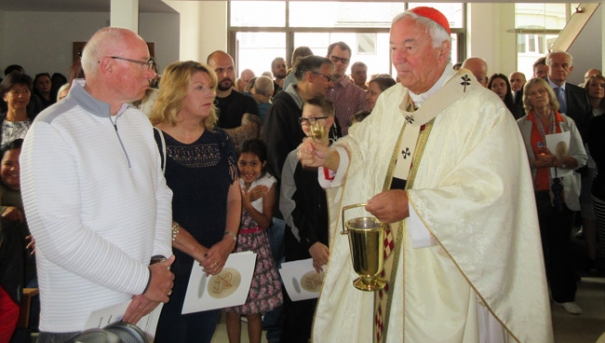 Union Street was packed with worshippers and well-wishers as the Cardinal’s procession left the garden at the rear of the United Reform Church and crossed the road to new steps to the enlarged building.

Above a new front door is a new window designed and engraved by Sally Scott depicting the Risen Christ, with the church’s patrons Mary Immaculate and Pope St Gregory the Great.

On his arrival Cardinal Nichols began the proceedings by telling the congregation of his joy at being present for a special moment for the Barnet parish.

After crossing Union Street, he stood at the steps and was welcomed by John Ainslie, who led the rebuilding team, and who described their 11-year journey to enlarge the church and make it “more expressive of the sacred histories celebrated in it”.

The re-opening was a proud moment for those who had worked on the project, the parish priests, parishioners, architects and contractors, and together they had created “something beautiful” that included not only the new engraved window, but also a new altar and sanctuary.

The Cardinal then invited the parish priest, Father John McKenna, to open the door so that they could all begin the service to mark the re-opening of the church and the consecration of the altar.

The new church was packed for the service, with many standing in the aisles and congregation spilling out onto the steps.

Known to its parishioners as St Gregs, the church was rebuilt in the mid-1970s after being almost destroyed in a fire in 1973, and higher attendance at mass and other services necessitated the need for enlargement.

Seating capacity has been increased from 240 to 340 and some of the extra space has been achieved by the construction of a two-storey extension at the front.

Father McKenna, who was appointed parish priest in 2013, reinstated the building project. Capacity has been increased to 340 adults, equivalent to 400 people when account is taken of the large proportion of children at family mass.