We will be back, say Battle of Barnet re-enactors 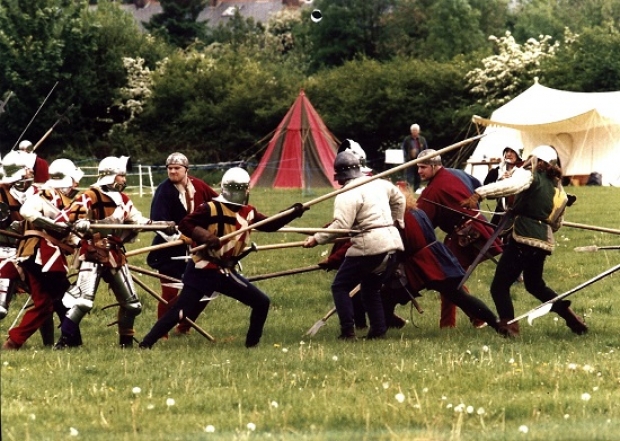 Barnet Museum is hoping that the splendid heraldic banners created by its volunteers will be hung along the High Street in time to mark the battle date of 14 April 1471.

A specially written play, commissioned by the museum, is due to be performed by the Bull Players and will be staged at the Bull Theatre, hopefully in April, or as soon as performances can safely resume.

Organisers of Barnet Medieval Festival have decided to reschedule this year's re-enactment of the battle to the weekend of 11-12 September from the original dates of 5-6 June.
Susan Skedd, the festival's director, said the priority was to try to ensure that the 550th anniversary was celebrated this year with the fullest possible programme of battle re-enactments and medieval displays.

“We felt that moving the event to later in the year will give us the best chance of staging the 2021 festival and, all being well, we look forward to putting on a really fantastic event'.
The festival team has been heartened by the positive responses and messages of support they have received from re-enactors and traders, who are all keen to return to Barnet in such a special year.

The Bull Players, a recently-formed amateur dramatic group, are determined that their play, The Fog of War – which has the Battle of Barnet as its backdrop – will be one of the highlights of the anniversary celebrations.
It is being written by James Godwin (21), son of the Players’ director and producer, Siobhan Dunne, who produced the Players first-ever production, Love and War, which had its first night at the Bull in 2019. 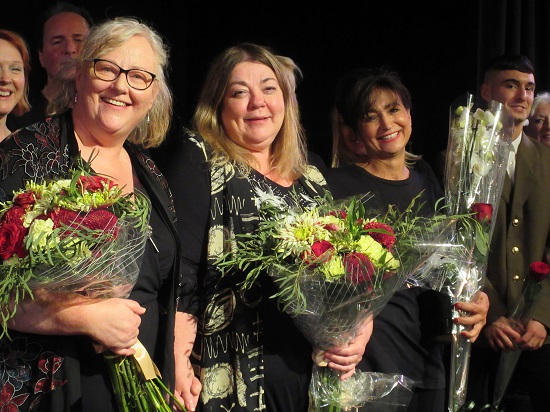 Ms Dunne (left) – seen here with Susi Earnshaw, the Bull’s artistic director and cast member Pina Griffin – said that her son, who is studying for a degree in creative writing at Bath Spa University, is writing the play as his final year project.
“I have given James a pretty tight remit to produce a script suitable for an amateur dramatic group with parts for eight women and seven men.
“The play is set against the backdrop of the Battle of Barnet, but the aim is to reflect the local history and show the effect of the battle on local people.
“Much of the action will take part in a medieval beguine – which were communities for women – and in a medieval kitchen, like the one in Barnet Museum, and the play will explore the impact on their lives during the day and night of the battle.”

Ms Dunne said James was currently writing the last scene and she hoped that a first draft would be ready shortly for a read through by the group.
Originally the plan was to have The Fog of War’s first night at the Bull on Easter Monday but if that proves to be impossible because of ongoing coronavirus restrictions the aim will be to present the play during the summer. An outdoor performance might even be possible on Hadley Common.

An earlier re-enactment of the Battle of Barnet – held at the Byng Road playing fields in August 1999 – featured several medieval displays including a recreation of Barnet’s historic market, which celebrated its 800th anniversary that year.
King John granted Barnet a market charter in 1199.

Re-enactments of the battle were restarted as part of the 2015 Battle of Barnet Project and archaeological dig, which was supported by the Heritage Lottery Fund.
After staging re-enactments and in 2018 and 2019 – which both attracted record crowds of spectators – the organisers were forced to cancel last year’s medieval festival because of the Covid.19 pandemic.
Another coronavirus casualty last year was the absence of the High Street display of medieval banners.

The 2019 festival attracted over 350 Wars of the Roses military re-enactors and enthusiasts and on the final day, they captivated a crowd of over 5,000 who watched re-enactments of both the Battle of Barnet (1471) and the second battle of St Albans (1461). 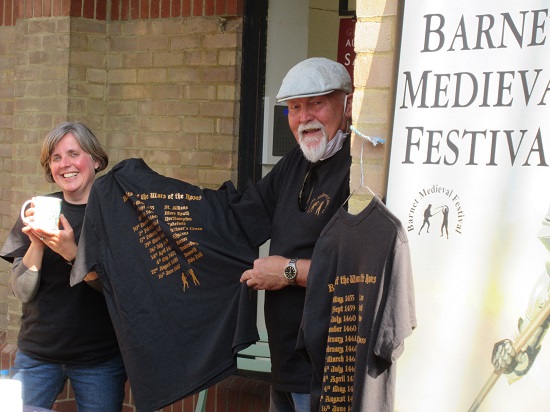 As soon as lockdown conditions are eased, the organisers will arrange for another stall to promote the medieval festival and to sell the festival merchandise.
In the meantime, commemorative mugs, T-shirts and hoodies (as displayed by Susan Skedd and Bob Burstow, chair of the trustees) can be bought from the online shop: https://barnet-medieval-festival.sumup.link/

Published in General News
More in this category: « Appeal to dog owners: breeding season starting for swans and wildfowl Anger over proposals for solar panels in Barnet parks and open spaces »