Underhill school to go ahead

Labour councillors opposed the application because they feared traffic congestion and doubted the need for a 1,200-place new school, but they were outvoted by the Conservative majority on the committee.

Councillor Paul Edwards led the opposition arguing that hundreds of Underhill and High Barnet residents had grave concerns about the environmental impact of a super-sized school, and they considered it was an unnecessary breach of the green belt.

Incredibly all six Conservative councillors on the committee
voted in favour.

“Incredibly all six Conservative councillors on the committee voted in favour. This decision sets an extremely worrying precedent for the rest of Barnet’s green belt under the Tory administration,” said Councillor Edwards.

The first application for a new school at the football ground was submitted last September after the site was purchased for £14.5 million by the government’s Education and Skills Funding Agency.

Ark Academy chain was chosen to run the new school, and originally the agency proposed a 1,690 place all-age school, but after that was rejected in January, a fresh proposal was submitted for a slightly slimmed-down super school with 1,200 places, including 300 at sixth form. 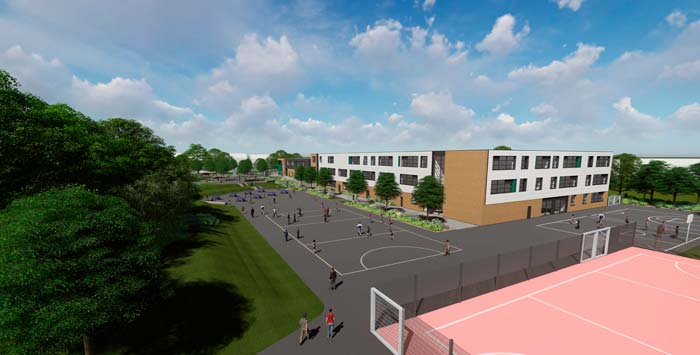 Councillor Edwards said the new academy failed the test for justifying a development in the green belt because the projections of the Greater London Authority suggested there would be only a temporary increase in the number of new entrants requiring schooling – this would peak in around 2020 and then decline to 2017 levels.

He was joined in his protest by another Underhill councillor, Councillor Jess Brayne, who was disappointed by the decision because of the impact it would have on the lives of local residents and for anyone driving along roads such as Mays Lane or Barnet Lane.

Earlier this month the Underhill councillors had complained that there was only eight days’ notice that the decision would be taken on Wednesday 25 October and they tried unsuccessfully to get the application deferred to the November meeting.

Their protests have been supported by Andrew Dismore, London Assembly member for Barnet and Camden, who attended the planning committee meeting and who has written to Barnet Council challenging the legality of the decision.

Mr Dismore believes that the Council’s advice was unlawful because the committee was told that if the application for a government-funded new school was rejected then the cost of a future school elsewhere in the borough would fall on the council.

“The funding of a new school is not a planning consideration in law, but clearly was a factor in the mind of the chair, and also by extension those the chair sought to influence, namely the Conservative councillors on the committee.

“Moreover, no officer stepped in to correct the chair and to make the point that this was an irrelevant factor.

“In approving the application, the committee took into account irrelevant matters, which I argue makes the decision unlawful, and would make this application susceptible for judicial review.”

Mr Dismore has asked the council’s chief executive to refer the decision back to another “differently constituted committee” for a lawful decision to be taken.