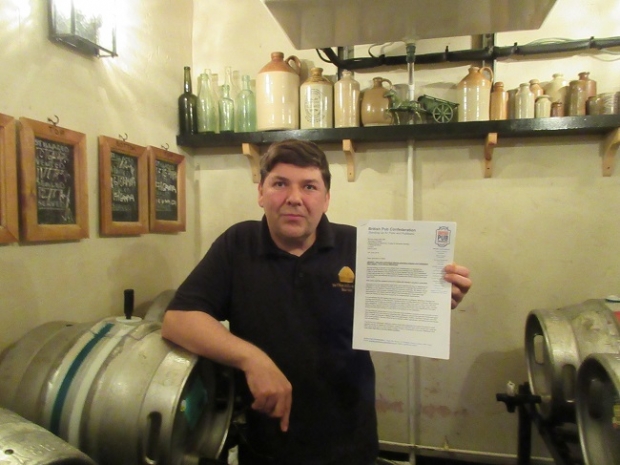 Real ale down the drain at the Mitre
High Barnet publican Gary Murphy, licensee of the Mitre, has gone viral in a campaign to force pub owners to back down and agree to a rent holiday while the coronavirus lockdown continues. After attracting over 400,000 views of his tweet, #norentnopub, he appeared on BBC Radio 4's programme You and Yours, was interviewed by the Daily Telegraph and then featured on BBC tv's London News..

Greene King charge Mr Murphy just under £2,000 a week in rent for the Mitre and in the last five weeks he has already clocked up a debt of almost £10,000.

When challenged by You and Yours, Wayne Shurvinton, managing director of Greene King's tenanted and leased division, promised support for licensees in financial difficulty but resisted the calls for rents to be cancelled during the crisis.

Unless the pub companies agree to a rent holiday for tenants, Mr Murphy fears that many will be forced to give up their businesses not least because pubs and bars are likely to be the last to be allowed to ease up on social distancing controls.

"It's a critical decision for landlords as to whether they continue running their pubs when they are building up these enormous debts and will then have to face the challenge of re-opening."

Along with other licensees in the Pub Owners Network, Mr Muphy is boosting their campaign on Twitter and is taking advice on the possibility of a legal challenge on the grounds that their purchasing agreements with Greene King and other pub companies are not capable of being honoured during the crisis.

Lockdown has left real ale and other beers worth £6,000 going to waste in the Mitre's cellar.

Beer that passed its sell by date and was undrinkable had to be poured down the drain, but brewers have promised to take back unopened kegs and casks and Mr Murhpy hopes that eventually stock worth up to £5,000 might be replaced.

Seven of his staff have been furloughed -- with the government meeting up to 80 per cent of their pay -- and he has redeployed another employee to do maintenance.

He will also benefit from the government coronavirus grant scheme -- of between £10,000 and £25,000 -- for shops, pubs and other traders, depending on their rateable value.

His fear is that by refusing to give tenants a rent holiday, Greene King hope to "make a grab" for any grant money publicans might receive from the government.

"Our compaign is hoping to put pressure on the pub companies to get round the table and agree a nine-month rent and mortgage holiday for their tenants. That would be much more realistic.

"Yet we don't even know what the social distancing restrictions might be on pubs and they could last for a year or two.

"I will have to decide how much of my pension, savings and personal money I want to put into the business to continue running the Mitre."

In his interview for You and Yours (29.4.2020), Mr Shurvinton said Greene King had deferred all rental payments on 17 March, removing any immediate cash flow problem for tenants.

Business development managers were looking at the position of individual landlords on a case-by-case basis.

Greene King recognised that some licensees might not qualify for any help under the government grant scheme. Therefore, the company preferred to deal with tenants on a one-to-one basis rather than agree to the across the board rent holiday advocated by the Pub Owners Network.

So far out of the six major pubcos, only Admiral have cancelled rent during the lockdown. Mr Murphy said smaller brewers had agreed a rent holiday, including the three McMullen pubs (Queens Arm, King's Head and Sebright Arms) and Young's pub, The Lord Nelson.

Mr Murphy said he had kept busy in recent weeks re-varnishing the floors of the Mitre, ready to welcome customers once the lockdown is lifted.

"Personally I don't think strict social distancing and keep drinkers apart is going to work in pubs. Going for a drink is a civil liberty. I think people will make that choice for themselves and live with the consequences."

He remained optimistic that the Mitre would survive and see the return of his regular clientele.

"By hook or by crook we will get throught this, but I fear that many other Greene King tenants might not be so fortunate and will struggle to re-open, even with govenment help."