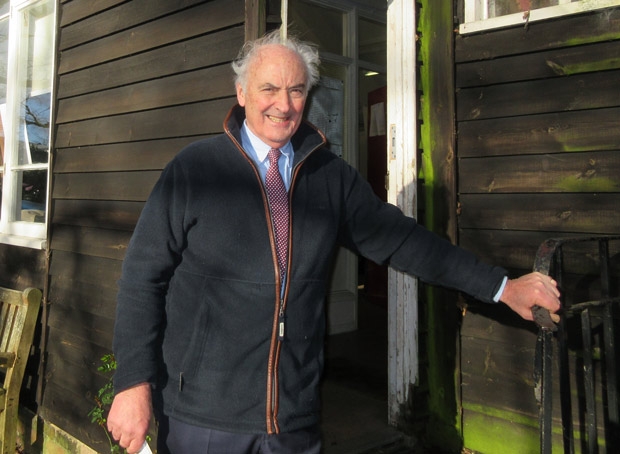 Richard Powles, trustee of the Gwyneth Cowing estate, on the steps of the artists’ studio that she had built in 1961 for Barnet Guild of Artists.
Trustees for the fields around Whalebones, where just over 150 new homes are planned, say they believe the wishes of the former owner, the late Gwyneth Cowing, will be honoured.

Some of the land between Wood Street and Barnet Hospital will be opened up to public access; the trustees will provide a dedicated new home for Barnet’s artists and beekeepers; and ensure that 40 per cent of the new homes are “affordable housing for local people in need”.

Richard Powles, one of the two trustees, told the Barnet Society that part of the proceeds from the sale of the land will be set aside to ensure other lasting legacies to Miss Cowing, whose family owned the Barnet Press.

But the development plans, drawn up by housebuilders Hill – on behalf of the trustees of Miss Cowing’s estate – are being opposed by the Chipping Barnet MP, Theresa Villiers, who has launched a petition demanding that the fields around Whalebones be retained for agricultural use.

Since becoming the Chipping Barnet MP, she says she has campaigned to protect green spaces within her constituency, and she fears that one of the “most historic green spaces” could be lost forever.

“Miss Cowing was a noted local artist and painted many scenes of Barnet’s natural environment.

“In her will, she expressed the wish the fields be conserved for use as agricultural land for as long as possible, and I am launching a petition to show the developers and executors of her will that local residents are against the development of Whalebones and that these fields should be protected for future generations,” said Ms Villiers.

At a public exhibition of the latest plans to develop the fields between Wood Street and Wellhouse Lane (land that adjoins the privately-owned Whalebones House), the Waltham Abbey-based housebuilder Hill confirmed that it hoped to submit a planning application in March.

If approval is given by Barnet Council, work might start in early to mid-2020.

It is just the kind of concept that we are sure would have had Miss Cowing’s whole-hearted approval.

In addition to the construction of 152 new homes on the 7.6-acre field opposite the Arkley public house, the trustees intend to create two areas of public parkland, a woodland walkway, and provide a new community building with space for both the Barnet Guild of Artists and Barnet Beekeepers Association.

“The trustees want to honour Miss Cowing’s spirit of philanthropy and the new studio for the artists and working space for the beekeepers will ensure they both have a secure home in the future, which we know was her wish,” said Mr Powles.

“We are sure she would have been just as keen about our plans to open up parts of her estate to the public.

“One area of parkland will include the existing duck pond and will be alongside a new woodland walkway from Wood Street to Barnet Hospital. 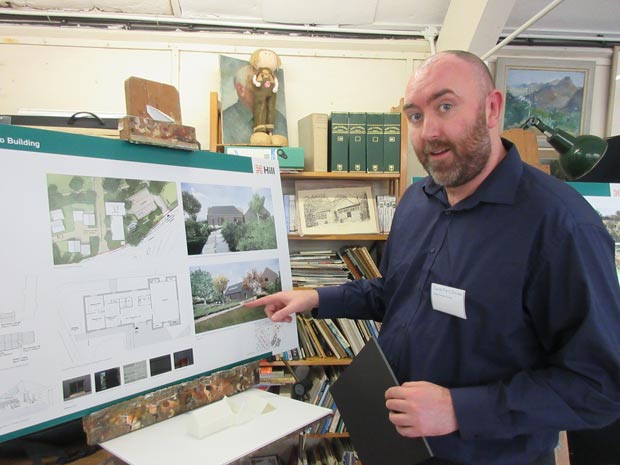 Architect Daniel Parry-Davies says the new community building with a studio and work space for Barnet’s artists and beekeepers will reflect an agricultural landscape in the new development adjoining Whalebones.“The other piece of land open to the public will be close to the junction between Wood Street and Wellhouse Lane. This will be laid out as a healing garden, where visitors and patients at Barnet Hospital will be able to sit outside and get some fresh air.

“It is just the kind of concept that we are sure would have had Miss Cowing’s whole-hearted approval.

“We see the development as a once and for all opportunity to provide a lasting memorial to all her philanthropic work in Barnet.”

The developers have yet to complete negotiations with the charitable group, the Land Trust, which it is hoped will take on the ownership and management of parkland and woodland walkway in return for an endowment from the Cowing trustees, thus ensuring that the parkland has protection as a public open space.

“We hope to have completed our negotiations and pre-planning discussions in time for a planning application to be submitted in mid-March,” said Jeremy Thurlby, Hill’s planning design manager.

The shared community building for the artists and beekeepers, to front on to Wellhouse Lane, will be a single-storey barn-like structure intended to reflect an agricultural landscape.

“Next door is the rent-free cottage of the Whalebones tenant farmer and his garden is going to be enlarged to provide sufficient land for rearing chicken and geese,” said Daniel Parry-Davies, of the architects Pollard Thomas Edwards.

“Alongside will be the healing garden and this landscaped area will be open to the public and we hope will prove popular with visitors and patients to Barnet Hospital.”

Mr Parry-Davies said one of the changes made to the design following consultations with planners and residents’ groups was to set the new houses further back from the Wood Street frontage than the new houses in the adjoining Elmbank development.

“We are planning for houses of a smaller scale behind a buffer zone made up of the existing hedge plus additional tree planting. So, the new houses will be set back further from the main road than the existing houses in Wood Street.”

Entry to the new estate will be via a new road off a roundabout to be constructed in front the Arkley public house at the junction of Wood Street, Barnet Road and Galley Lane.

“We are planning for a small roundabout with a central grassed island and a new pedestrian crossing,” said Dafydd Rees, another member of the planning team.