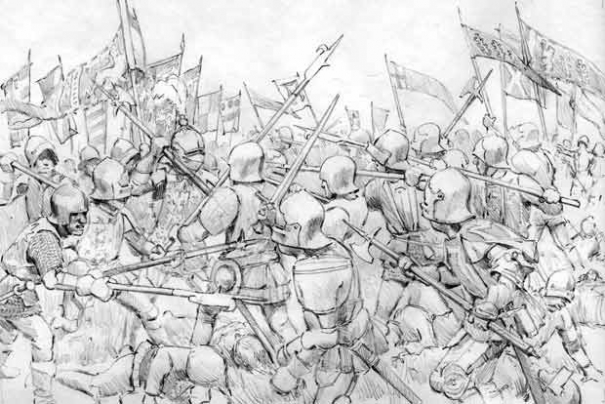 Graham Turner, a leading medieval artist, has been commissioned to produce an oil painting depicting the battle to feature in a new display at Barnet Museum.

A preliminary sketch of the picture shows King Edward IV wielding a poleaxe at the height of the confrontation between the Yorkist and Lancastrian armies.

On display are the banners and standards of the noblemen taking part, and in the foreground of the sketch images of dead and wounded soldiers, plus a fully armoured knight moving purposefully forward and looking in the direction of the King.

Recently Mr Turner loaned a print of his celebrated painting of a young Richard III at the Battle of Barnet for display at the museum. “Challenge in the Mist” shows Richard, then the 19-year-old Duke of Gloucester, looking apprehensively across towards the Lancastrian army.

He hopes that his new painting will convey immediately a sense of what happened at the Battle of Barnet.

“I hope my research into the battle will convey the ferocity and brutality of medieval warfare. It is so important in an historical painting to get an accurate depiction of the weapons, armoury and heraldry of the armies that took part.”

Generating interest in Barnet’s role in the Wars of the Roses, and providing a lasting legacy, are among the objectives agreed by the Battle of Barnet Project when it received financial support from the Heritage Lottery Fund.

Such was the success of the first Barnet Medieval Festival earlier this summer that the organisers are planning to repeat the event in June next year – and an ambitious target has already been set to raise £25,000 to replace this year’s funding from the HLF.

By fixing the date for a repeat of the medieval festival – over the weekend of Saturday and Sunday, June 8 and 9, 2019 – the organisers hope to keep up the momentum.

But this is subject to funding and the challenge will be to raise £25,000 over the next six months through sponsorship, crowd funding and a wider appeal. Volunteers and those offering support are asked to contact: This email address is being protected from spambots. You need JavaScript enabled to view it.

This was the first re-enactment of the Battle of Barnet since 1998 and supporters of the project – established by Barnet Museum, Battlefields Trust and Barnet Society – are hoping to create an annual commemoration along the lines of the Tewkesbury Festival, which is now in its 23rd year of celebrating the Battle of Tewkesbury, held on 4 May 1471, less than a month after Barnet (14 April 1471).

During the winter months volunteers at Barnet Museum are planning to paint more of the heraldic banners relating to the battle.

The aim is that when they are installed in the High Street to promote next year’s medieval festival there will be enough to hang from lamp posts starting at High Barnet tube station rather than the parish church.