Re-living the Battles of St Albans and Barnet 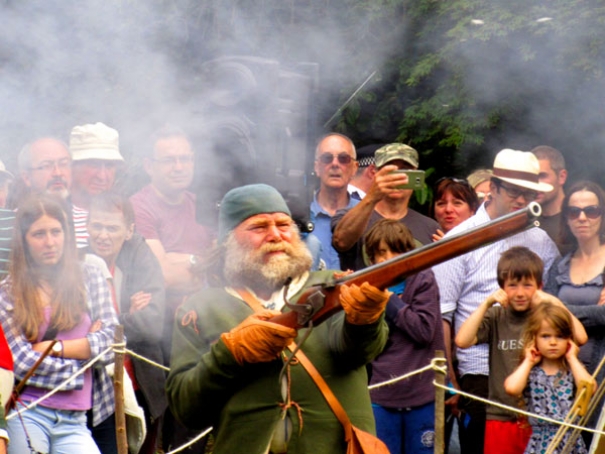 Gunnery from the time of the Wars of the Roses was a highlight of events at the 2017 Tea in the Park
Scenes from the battles of St Albans (1461) and Barnet (1471) – two of the engagements in the Wars of the Roses – are to be re-created as part of the Barnet Medieval Festival to be held over the weekend of June 9 and 10 at the Byng Road playing fields.

Re-enactors from the Medieval Siege Society and other members of the Wars of the Roses Federation, dressed in armour and the livery of the Lancastrians and Yorkists and other noblemen, will take part in staged combat, give archery displays and fight mock battle scenes with handguns and cannons.

Up to seventy period tents will be erected, split between the Yorkists and Lancastrians, complete with flags and banners and there will be living history displays of food preparation, cooking and other camp activities.

A star attraction will be a re-enactor dressed in the armour and livery of King Edward IV, who will be stationed in the king’s tent, ready to answer questions.

Edward’s army killed the Earl of Warwick, “Warwick the Kingmaker” – one of the most powerful men in the country – at the Battle of Barnet on 14 April 1471.

Archaeologists and historians believe the engagement was fought in fields in and around Kitts End Lane, to the north of the obelisk at Hadley that commemorates the battle.

Detailed plans for the Barnet Medieval Festival are being released to coincide with Saturday 14 April 2018 – to help celebrate the 547th anniversary of Barnet’s place in the history of the Wars of the Roses.

Up to 200 re-enactors plan to start erecting their tents on Friday ready to stage two days of displays from 10am to 4.30 pm – with scenes on both Saturday and Sunday from what was the second Battle of St Albans on 17 February 1461 and then the Battle of Barnet.

There will be narration throughout the events explaining the battle scenes, archery displays, canon firing and other activities. 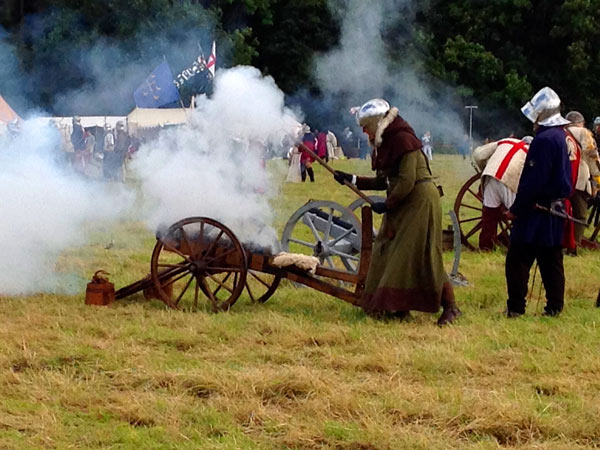 Mock cannon firing as scenes are re-created from the Battle of BarnetThe Battle of Barnet was notable for the first extensive use of “handgonnes” in a British battle as Edward had Burgundian and Flemish gunners with him and Warwick had his contingent as well.

Barnet was also significant historically for the degree to which artillery was used by Warwick who bombarded the Yorkists overnight from higher ground anticipating he would demoralise and disorder them as well as cause serious casualties, but little realising his guns were overshooting the Yorkist lines and therefore being ineffective.

Among the attractions at the festival will be medieval traders selling replica items.

Barnet shops and traders also have ideas for themed products for the festival weekend.

A poster to promote the festival features a specially commissioned painting by the medieval military artist Graham Turner.

It shows Edward IV in full armour, emerging from the mist, with his royal standard and two soldiers dressed in their coloured coats of murrey and blue and a Yorkist white rose.

To coincide with the day of the anniversary Mr Turner is to give a talk about paintings of the Battle of Barnet and the Wars of the Roses at the Pennefather Hall, Christ Church – from 1pm on Saturday 14 April 2018.

To promote the festival, replica copies of heraldic banners of the dukes, earls and knights who fought in the 1471 battle are to be hung in Barnet town centre, hopefully outside some of the shops and premises along the length High Street.

They are being painted by volunteers at Barnet Museum, just one of the activities being organised by the Battle of Barnet Project.