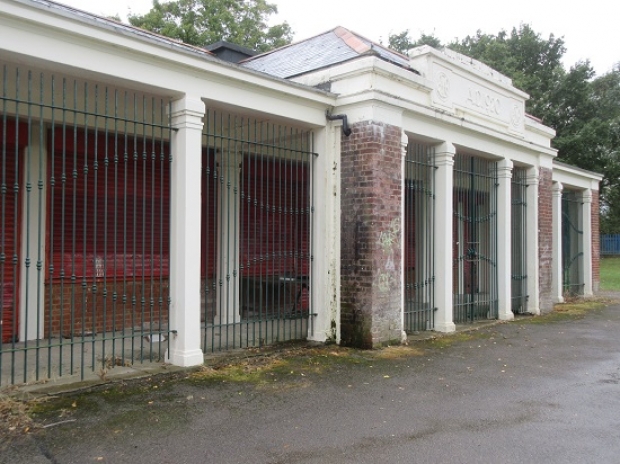 Barnet Council is being asked to investigate whether restoration of the boarded up cricket pavilion in Tudor Park sports ground might be financed in part through a community infra-structure levy that will have to be paid on multi-storey blocks of flats proposed for the New Barnet former gas works site.

Pressure for a positive response has increased following the revelation that the council has downgraded the Tudor Park sports ground and children's play area to "a low quality low value site" - a decision that has produced an outraged response on social media.

Despite being advised that infra-structure money from the Victoria Quarter redevelopment would not necessarily be available to improve facilities at Tudor Park, the Chipping Barnet MP Theresa Villiers is urging the council to consider this possibility.

She believes the proximity of the redevelopment planned for the gas works site and the popularity of Tudor Park warrants a rethink..

Tudor Park’s cricket pavilion, opened in 1920, has been boarded up for the last ten years, and the council estimates it could cost around £180,000 to repair and make safe.

Under their existing application for the new Victoria Quarter, developers Fairview and One Housing will have to pay a £11 million levy towards local infra-structure projects such as road improvements. As a result of the decision earlier this month by Barnet’s planning committee to reject plans to almost double the number of new flats from 371 to 652, the Victoria Quarter application is now being considered by the Mayor of London.
Local residents believe this is an ideal opportunity for the council to review the allocation of the infra-structure levy.

Ms Villiers, who has supported previous attempts to refurbish the100-year-old pavilion for community use, has been told that under the council's parks and open spaces strategy, Tudor Park had been identified as “a low quality low value" park which meant it was not a priority site for investment.
Currently the council had funding of around £30,000 for work on parks and open spaces but there was “no further budget available to undertake repair works on the pavilion”. Because of subsidence damage, further structural assessments and designs would be required which might push the cost above £180,000. 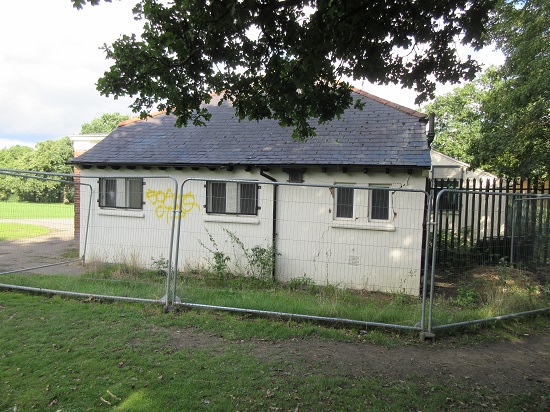 As there was no funding to meet the estimated £180,000 repair bill, the council would not be taking “any action at this time” other than structural surveys to monitor the stability of the pavilion for safety purposes.
High Barnet councillor David Longstaff, who has also urged the council to repair and refurbish the pavilion, acknowledges that because of financial constraints there is currently no budget for necessary repairs to collapsed drains and subsidence.However, campaigners for the pavilion’s restoration hope the council and developers might reconsider re-allocating some of the Victoria Quarter infra-structure levy towards improving access to Tudor Park sports ground and children’s play area, and on refurbishing the pavilion for community use.

To upgrade the footpath under the main railway line, between Westbrook Crescent/Lawton Road and Cromer Road, the Victoria Quarter developers have already agreed to rebuild the footbridge leading to the pedestrian tunnel. 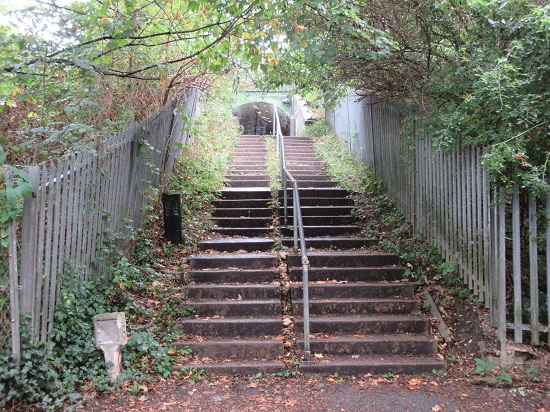 Steps leading up to the footbridge and steps down from the tunnel will be removed and replaced with sloping pathways for easier access. Lighting and CCTV monitoring will improve safety for pedestrians.
If some of the infra structure levy money could be re-allocated, improvements could also be made to the footpath leading from Cromer Road to the New Barnet allotments and Tudor Park sports ground and perhaps the pavilion itself.

Despite this being the centenary of its construction, the pavilion presents a sorry sight, surrounded by barriers, its outer walls disfigured by graffiti and in need of repair.
Originally the pavilion, built in a neo-Georgian style, served the sports ground opened by the former New Barnet medical supplies manufacturer, S Maw, and Sons and it bears the logo of S Maw along with the date 1920.

Earlier this year the pavilion was included in Barnet Council’s local heritage list as being of historical and architectural interest because of its social and communal value, age and rarity, and landmark qualities.
In the late 1930s, the sports ground was sold to the local council and it became a public park.

Although the council is taking no action over the former cricket pavilion, an insurance claim is being made to repair the former clubhouse of East Barnet Golf Club which is also closed because of subsidence. However, part of the wooden building is currently being used as a kiosk for Tudor Park Footgolf which has given the former golf course a new lease of life for the up and coming sport of football golf (in which players kick a football into a hole with as few shots as possible).

Earlier this year Councillor Longstaff investigated the possibility of recolating the footgolf club to the cricket pavilion -- together with a cafe - but was told this was not a priority for the council. Four years ago, Councillor Longstaff and Ms Villiers supported two local residents, Anne Maher and Maria Hanna, who had plans to re-open the disused pavilion as a café.
Barnet Council began advertising the pavilion as a potential business venue in 2012 and the two women paid a £2,000 deposit on a lease, only to be told suddenly that the building was no longer considered safe or suitable for a café.
Ms Villiers intervened on their behalf in 2015 and again in 2016 but to no avail despite urging the council to embrace an “excellent initiative” to renovate “an attractive heritage building which is increasingly dilapidated and turning into an eyesore”.
“This would help breathe new life into Tudor Park and encourage more people to use this little gem hidden away.”

Two children's play areas in Tudor Park are extremely popular with local parents -- and demands for local playgrounds will increase on completion of the Victoria Quarter development which is expected to house 1,485 new residents, including 170 children under five and up to 120 of primary school age.

A café on an unused site in the Old Court House recreation ground in High Barnet – next to a children’s playground and Barnet Lawns Bowls Club – has demonstrated the potential viability of such ventures.

Update (28.9.2020): Theresa Viliers, MP, said she had received further clarification from Barnet Council regarding the allocation of potential infra-structure levy on Victoria Quarter. Levy funds tend go into a "central pot" to fund projects across the borough such as the new leisure centres at the Victoria Recreation Ground, New Barnet, and Copthall.

Any monies obtained from the Victoria Quarter would have to be allocated to the closest park which was the Victoria Recreation Ground which was currently graded as "a low quality high value park" within the council's parks and open spaces strategy.