Physic Well to be restored 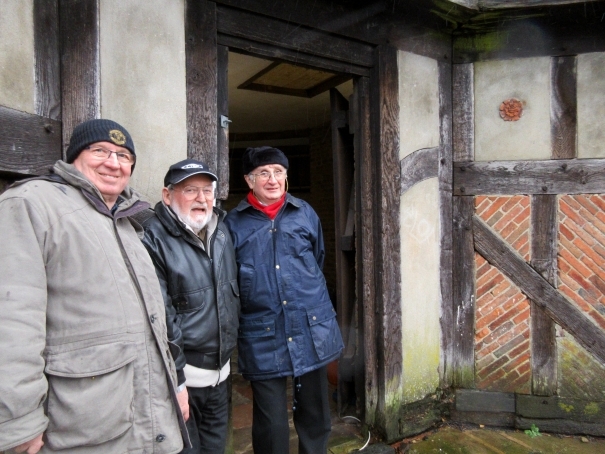 Mike Jordan (centre) chair of Barnet Museum’s trustees, was on hand with volunteers Dennis Bird (left) and Bob Langley to answer visitors’ questions
Years of uncertainty about the ownership of Barnet Museum and the future of Barnet’s historic physic well have both been successfully resolved after sustained efforts by volunteers and well-wishers.

A 125-year lease has now been secured from Barnet Council for the museum in Wood Street, High Barnet, and the council has also agreed to share with the Heritage of London Trust the cost of restoring what is believed to be the best preserved medicinal well in the country.

The Tudor style well-house, which was built in 1937 after the rediscovery of the17th century brick-vaulted well in 1921, is in a very poor state of repair and is currently on Historic England’s heritage at risk register.

Once the roof has been replaced, hopefully with hand-made clay tiles, new leaded windows fitted, and the interior refurbished, the museum hopes to take over ownership from Barnet Council.

The museum expects to obtain a minimum 50-year lease, renewable for another 50 years, and the aim is to open the well to the public on a regular basis and stage displays explaining its history.

The 125-year lease for the museum, at a peppercorn rent, gives the trustees the security of tenure they need to be able to apply for grants towards the cost of constructing a disabled entrance and rear extension at the Wood Street building.

“We badly need extra space at the museum and now we will be in a position to seek financial support and hopefully Lottery funding,” said Mr Jordan.

Final agreement between the council and the Heritage of London Trust to renovate the well house is the culmination of years of campaigning to recognise the historic importance of the physic well, in Well Approach, just a short walk from Barnet Hospital.

The last open day before the start of restoration work was held in early February.

Despite a wet Saturday afternoon over 25 visitors, as well as some children from Foulds School, descended the steps to see the well which is still fed by clear spring water – the same steps that would have been used by diarist Samuel Pepys on his visit to Barnet.

The well’s iron-rich water was recommended by doctors for its curative powers and sent down by barrel to pubs in the Strand.

But as other spring-fed wells closer to central London became popular, Barnet’s water fell out of fashion, and in the 1840s the old vault was filled in and only a small iron pump and cup marked its spot.