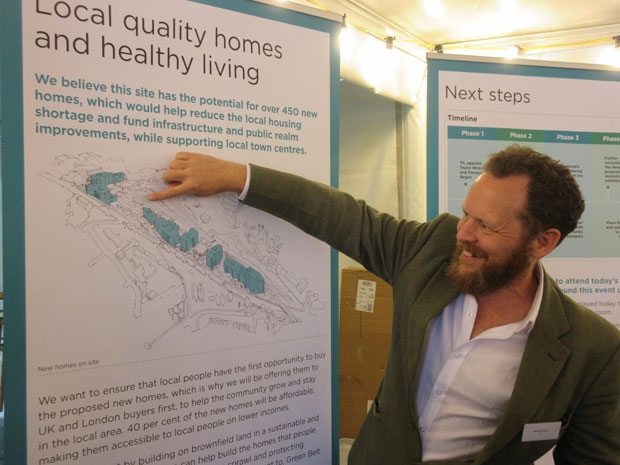 Blocks of flats of perhaps five storeys, or even higher, would stretch down Barnet Hill from the wooded land at the junction with Meadway all the way to the storage and container yards where the underground bridge crosses the main road at Underhill.

Architects Scott Brownrigg say that public access to the tube station would be improved, but the car park would be dramatically reduced in size and would be left with only 25 per cent of its current capacity.
Similar plans are about to unveiled for developing land around Finchley Central tube station, where up to 700 homes are proposed, and at Cockfosters tube station car park, where a scheme is being developed to build homes to rent.

A planning application is about to be considered by Barnet Council for the redevelopment of Colindale tube station, together with the construction of 300 new homes.

Taylor Wimpey is the developer working with TFL for the developments at both High Barnet and Finchley Central; and 40 per cent of the new homes would be sold at affordable prices.

Transport for London has been asked by the Mayor of London, Sadiq Khan, to have plans in place by 2021 to build a total of 10,000 homes on car parks and other vacant land around London’s tube stations.

Reducing the size of car parks at tube stations is one of the Mayor’s priorities in line with the objective of increasing the use of public transport.

When asked by the Barnet Society whether the existing access road and narrow turning area would be enlarged to take small buses – a proposal that has been widely canvassed locally in the past – TFL’s engagement spokesman Patrick Clark said that this was an idea that might be considered.

High Barnet’s plans were unveiled at an exhibition in the station car park which opened on Thursday 13 June and which continues until Saturday 15 June.

An artist’s impression of the blocks of flats to be built on land around High Barnet tube station, alongside Barnet Hill, from the junction with Meadway to the bridge at Underhill

Representatives of the Barnet Society and Barnet Residents Association were among those briefed on the plans by TFL.

Local residents are holding a public meeting to discuss the plans at the St Marks church, at 19.50 on Monday 17 June.

TFL’s aim is to test local reaction and then prepare more detailed plans later in the summer so that firmer proposals can be presented at another public exhibition in the autumn.

The aim would be to have a scheme ready for submission for planning approval by the end of the year or early 2020 with the hope of starting construction in 2021 and the first homes being completed and ready for sale in 2022 or 2023.

The initial plan proposes the construction of around seven blocks of flats. One of the largest would be in the woodland facing on to the Meadway, opposite Queen Elizabeth’s Girls’ School; another block, on the other side of the existing station footpath, would face Barnet Hill.

An additional five blocks, facing Barnet Hill, would be built on the car park and the storage and container yards right up to the junction with Underhill.

The existing tube station footpath up to the junction of Barnet Hill and Meadway would be improved and well lit. Proposals for the land opposite the top entrance to the station include the construction of a cycle hub and coffee shop.

TFL has commissioned a survey of the trees between the station and Barnet Hill and the Meadway. It says the wooded area is currently “inaccessible and under-utilised” and the aim would be to incorporate mature trees in the development with better public access.

A new public square would be created outside the lower station entrance with what TFL says would be a “pocket park that incorporates new play and amenity spaces”. The car park, although reduced in size, would ensure space for blue badge holders.

Another possible feature of the development would the provision of affordable workspaces to help business start-ups which could provide 40 new full-time jobs and create up to 50 jobs in the wider area.