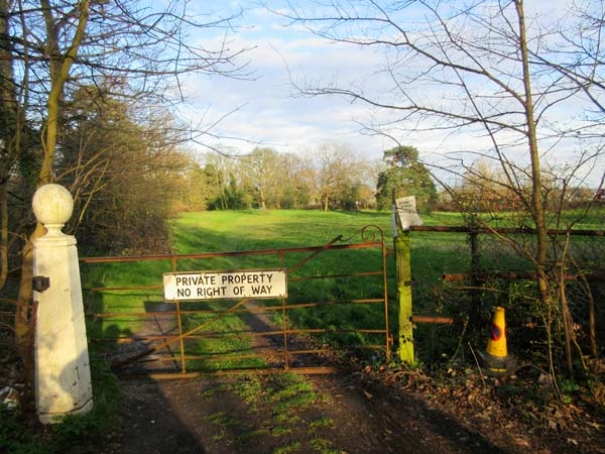 Whalebones in the sunlight
Building houses on the fields around Whalebones, between Wood Street and Barnet Hospital, has possibly moved a step closer following an agreement between the landowners and a leading housebuilder, Hill, of Waltham Abbey, Essex.

Trustees for the late Gwyneth Cowing, who lived in Whalebones for many years, say the newly-appointed developers will now explore the possibilities for developing up to 11 of the 14 acres of woods and farm land that is within the Wood Street conservation area, and contains numerous trees protected by tree preservation orders.

The earliest an application for planning permission might be made would be towards the end of this year. Initially the aim is to promote the site for inclusion in Barnet Council’s new local plan for housing development within the borough.

If approval for housing could be obtained – a prospect that has been resisted in previous years by Barnet Council, and is currently opposed by several leading councillors and the Chipping Barnet MP, Mrs Theresa Villiers – Hill would carry out any development, by then having purchased the site.

The trustees say that any plans to redevelop Whalebones would provide for community use and would include a studio for the Barnet Guild of Artists and space for the Barnet District Beekeepers, two groups that Miss Cowing wanted to have continued use of their premises on the estate for “so long as practicable”.

A new development would also leave room for some green space, accessible to the public.

An undertaking has also been given to the tenant farmer Peter Mason and his wife -- whose flocks of geese and hens are such a feature of the Whalebones estate -- that they will be provided free accommodation on the site for their lifetime.

The trustees say they have no option but to seek permission to develop Whalebones in view of the cost of maintaining the estate and their lack of income, and the increasing incidents of trespass.

The 11-acre site, bounded by Wood Street, Wellhouse Lane, and the new Elmbank development, excludes the three acres that belong to Whalebones house, which is privately owned.

The property recently changed hands and the new owners are understood to have told the trustees they are opposed to development on such an important green “oasis”.

This is very close to the Green Belt and it is a unique site, and it needs a unique solution.

The area that might be developed are the fields both sides of the house, next to Wellhouse Lane and alongside Elmbank.

In their statement, the trustees said they realised the significance of the Whalebones woods and fields. “This is very close to the Green Belt and it is a unique site, and it needs a unique solution.”

Robin Bishop, who leads for the Barnet Society on planning and environmental issues, said that if development of the site was accepted in principle by Barnet Council, the planning department should insist that any housing is of high design quality, and that the development of the site must be “an exemplar of environment sustainability, retaining as much existing natural habitat as possible.”

The trustees selected Hill given their track record on design – having won the Whathouse? Best Development Award in each of the last 3 years – and in working in partnership with numerous landowners who are interested in providing a lasting legacy. (https://www.hill.co.uk/about-hill/profile/.)

Hill has appointed architects Pollard Thomas Edwards to develop options for the site; Beacon Planning to advise on heritage matters; and Savills as planning consultants.

Initially preparatory work will include site investigation, and heritage and archaeological surveys.

The trustees have undertaken to consult the Barnet Society and other interest groups on the brief and design options within the next few months, “not least given Miss Cowing having been a founder member, and very mindful of what her wishes would have been in the present circumstances 30 years after her death.”