Guns & Smoke: too quick on the draw? 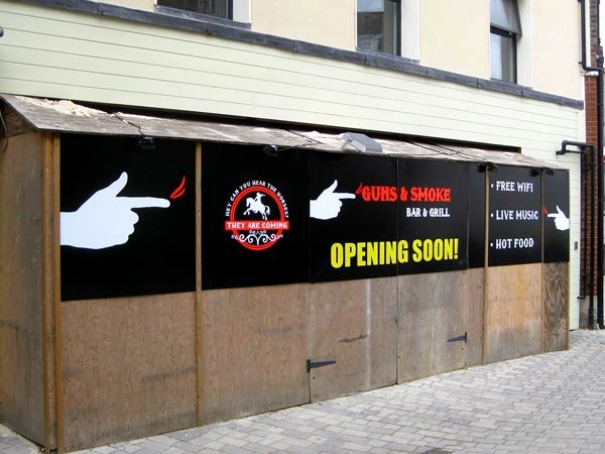 The new venue will be at 1 Church Passage, which is already at the centre of a long-running planning dispute over the use of timber cladding, some of which has since been removed after complaints that it made the building look like a Swiss chalet.

A hoarding outside Guns & Smoke says the new bar and grill, opposite Barnet parish church, will offer hot food and live music and will be “opening soon” – a claim that has taken Barnet’s planning department by surprise.

At the end of August the Barnet Society was told that the council had received “some preliminary sketches” of the proposed bar and grill but the department believed a formal submission was “some way off”.

The council said it would be “very surprised” if the new premises could open by mid-September, even if it was possible to resolve the long-running dispute about the use of timber cladding.

Guns & Smoke’s website has no hesitation about its imminent opening: “We have arrived. Our flagship restaurant in North London’s Barnet, at 1 Church Passage, is the first of many Guns & Smoke bar and grills across the UK.”

It advertises its opening and closing times and promises live music every Friday night and children’s entertainment every Sunday.

Events already arranged include a Halloween party on 31 October; a Christmas party on 15 December; and a New Year’s Eve dance party.

As planning approval usually takes about two months, Robin Bishop, chair of the Society’s planning and environment group, said he doubts whether Guns & Smoke could open prior to obtaining consent even if the premises had been fitted out as a bar and grill.

Although timber cladding had been removed from the top half of the frontage, the new windows were not regarded as being entirely satisfactory.

“The Society has been asked for its views by the planning department and while we will look at the whole frontage in context, there is still timber cladding at ground level and there needs to be something better at the top half of the building.”

Mr Bishop believed Barnet Council was still at fault for not enforcing the decision of a planning inspector in April that the owner should be required to restore the frontage to its original surface of rough pebble dashing.

After half the unauthorised cladding was removed in May, the planning department promised that a heritage officer would carry out an inspection in an attempt to resolve the disagreement over the frontage. 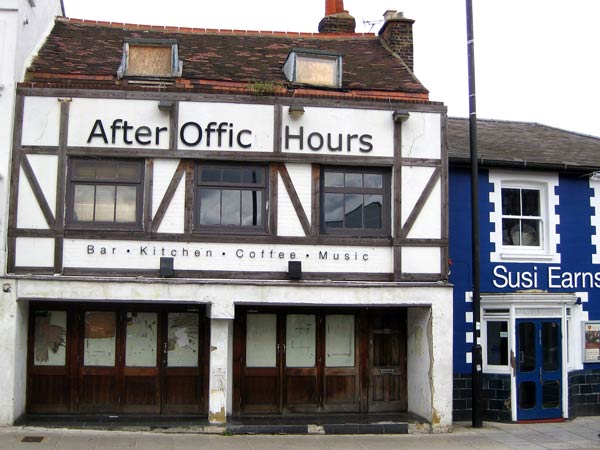 The changing fortunes of High Barnet’s licensed premises are reflected in the demise of the High Street bar After Office Hours, on the other side of the parish church.

An application has been made for planning permission to demolish and rebuild the property to include ten flats above new licensed premises.