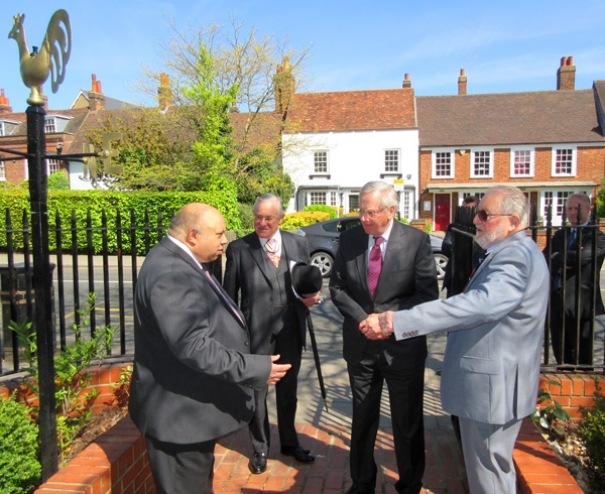 After visiting Barnet Museum, the Duke of Gloucester went straight to inspect the dilapidated state of Barnet’s historic physic well, and then on to Wrotham Park to view the fields where an archaeological dig has been taking place to determine the precise site of the Battle of Barnet.

Today’s Prince Richard, Duke of Gloucester, is the grandson of King V and a cousin of the Queen.

He was accompanied on a visit to Barnet and Finchley (10.5.2017) to see several community projects by Martin Russell, the Deputy Lieutenant for Greater London and the Lord Lieutenant’s representative in the Borough of Barnet.

The Duke represented the Queen at the recent reburial in Leicester Cathedral of his namesake who became King Richard III and who as the 18-year-old Duke of Gloucester fought as a commander in the Battle of Barnet.

Since becoming the patron of the Richard III Society, the Duke has taken a great interest in the project to discover the exact location of the Barnet battlefield, which is commemorated with an obelisk at Hadley Common.

A welcoming party at Barnet Museum, was led by trustee Mike Noronha who showed the Duke the latest finds from the archaeological investigation, including six medieval spurs worn by mounted horsemen and fragments of medieval pottery, which are all thought to provide possible evidence of the battlefield’s location.

At Wrotham Park, the Duke was welcomed by the current owner of the house, Robert Byng, and they walked from the house towards the fields off Kitts End Lane where archaeologists have been searching for evidence of the battlefield site.

Mr Byng told the Barnet Society it was quite a moment to be welcoming the current Duke of Gloucester and then recalling that his namesake fought not far from the house in what was said to have been one of the grisliest battles of the Wars of the Roses.

“We are only too happy to do anything we can to encourage the Battle of Barnet project and learn more about the links between the Wrotham Park estate and its place in such an historic encounter.”

The Duke’s inspection of Barnet’s historic physic well, where Samuel Pepys drank the local chalybeate water, was a boost to the campaign to repair and preserve the mock Tudor well house that was built in 1937 to house a dis-used 17th century well.

Barnet Council is in the process of transferring ownership of the well house to Barnet Museum as part of a concerted campaign to raise money for its preservation.

A survey commissioned by Historic England has advised that restoration work could cost as much as £150,000. The priority is to repair the roof with new tiles or shingles which could run a bill for at least £30,000.

“We hope that once the museum has control of the well house we can put together a bid to raise the necessary money and perhaps secure a grant from the Heritage Lottery Fund,” said Elizabeth Whitbourn, Historic England’s heritage-at-risk projects officer.

An offer of £5,000 towards the cost of repairs has already been made by the Heritage of London Trust whose director, Dr Nicola Stacey, took the Duke down the steps to see the well pools.

Dr Stacey thanked the Duke, who is patron of the trust, for his support and said she he hoped his visit would help kick start a campaign to promote the well and its links with Barnet.

“Once the repairs have been undertaken we hope it might be able to open the well to the public once or perhaps twice a week. Who knows, we might even get enough support to form the Friends of Barnet’s Physic Well.”