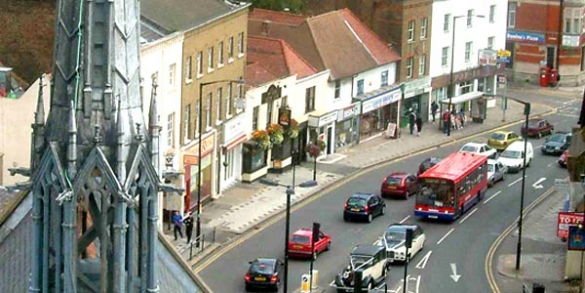 Barnet viewed from St John's Tower
The Barnet Society has been lobbying the Council for some time for a Town Centre Framework for Chipping Barnet, in line with its promise to provide one under adopted Planning Policy.

The Council has commissioned Town Centre Frameworks for other town centres in the Borough, but the timetable for production of the Chipping Barnet one has continually slipped.

A Town Centre Framework looks at what the place is and how it works (or doesn’t work) and produces a strategy for improvements to its appearance, heritage, transport, public realm, facilities and economy.   It also provides guidance for future development within the town centre to ensure this enhances the place rather than detracting from, or harming it.

After a Barnet Society ’walkabout’ in the town centre in September 2009, the Council agreed to a new initiative – the formation of a Town Centre Strategy Board, which would develop the Framework by involving members of the local community from the outset.

This is unusual, as the studies are normally produced by external consultants with minimal involvement from local people. The Board comprises representatives from the Barnet Society and other local RA’s, local traders, Barnet College, The Bull Theatre and 2 Ward Councillors from High Barnet and Underhill.

An encouraging start, with a huge amount of effort expended by all involved. But in December 2010 the Council announced that work on the strategy would cease whilst they looked into the implications of the new Localism Bill.  Despite it becoming clear that the Localism Bill did not preclude the preparation of Town Centre Frameworks and the Bill receiving Royal Assent in November 2011, the strategy work remained in suspense.

A start was made on two Planning Briefs for the Spires Shopping Centre and the TA Centre sites.

These were never completed but a high level Planning Framework for The Spires, Barnet Market and TA Site was prepared, published for public consultation and finally adopted by the Council at a cabinet meeting in July 2012. This document is now a ‘material consideration’ in the consideration of any planning applications coming forward, including the Barnet Market planning applications and the up and coming Spires applications.

Also in July, the Council finally agreed to re-start the Chipping Barnet Town Centre Strategy Board. The Board will be reconvened in September with a view to completing the Strategy by March 2013 (which is a very short timescale for a comprehensive document).  We are reviewing the Draft Strategy documents as they need updating following the extended period of inactivity.

The Council are only able to provide limited resources for the preparation of the final document, which means there is likely to be less urban design input than we should have, but at least the principles should be enshrined in the document.