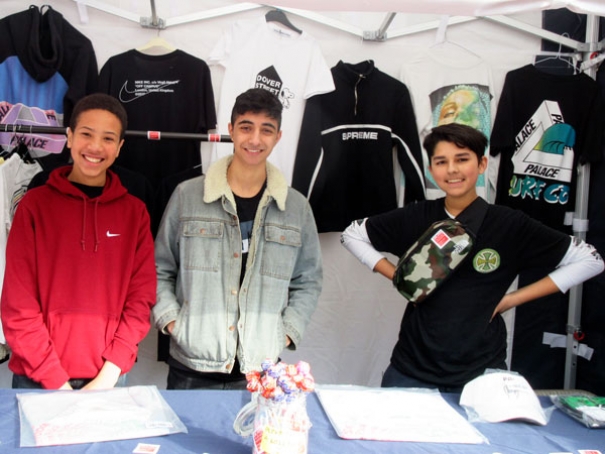 Twelve stalls almost filled the Waitrose entrance to the Spires shopping centre – and the bandstand had rarely seen so much action in years, with a succession of local musicians and singers providing live entertainment. 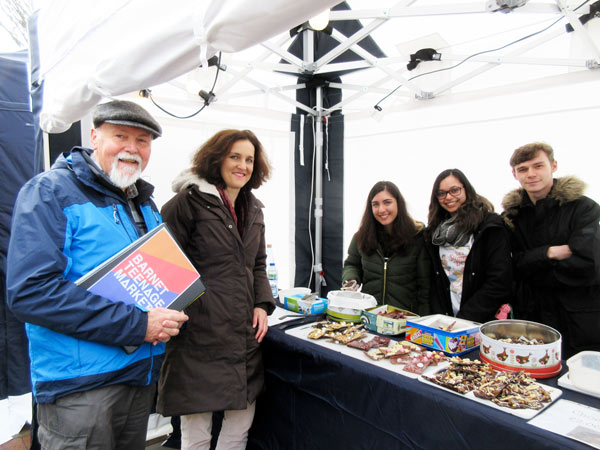 Bob Burstow, organiser of the teenage market, and Theresa Villiers MP, with Rosita Bagherzadeh, Georgia Dias and Nathan Lang selling home-made chocolates and sweetsOn sale were a wide variety of craft items, including chocolates, cakes and confectionery, lavender bags, and a selection of art work – all produced by youngsters who had taken stalls.

Darcey Gurner (14), a soul and R&B singer, was the first of the local artists followed by guitarist and singer, Alex Cyrile-King (15), who is a grade eight drummer.

Theresa Villiers, the Chipping Barnet MP, Councillor David Longstaff, and leaders of local community groups were all on hand to give a round of applause to the market organiser, Bob Burstow, who led the initiative by Barnet Town Team to launch the market for a twelve-month trial on the first Saturday of each month.

Mr Burstow thanked all those who had supported their crowdfunding appeal and helped get the market ready for opening. 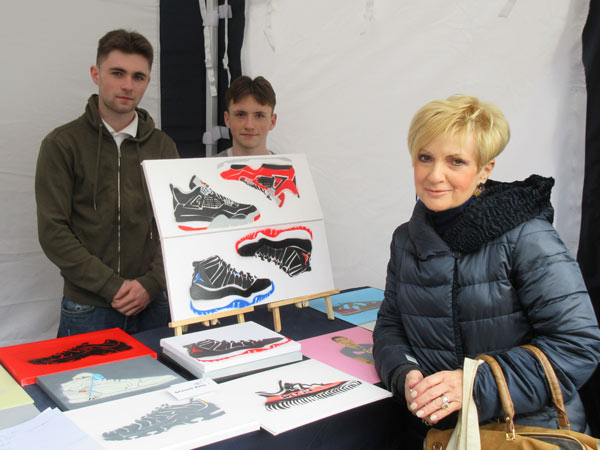 Gail Laser of Love Barnet with Luke Farrelly (left) and his brother Matthew, have started Stencil King, a business selling hand-made stencil-based art workGail Laser, organiser of Love Barnet and a member of the Town Team, praised the initiative of Luke Farrelly (20) of Dollis Valley, and his brother Matthew, whose stall was selling hand-made stencil-based art work, under their own brand, Stencil King, and candyfloss under the brand Collective Candy.

“These are two lines that I am trying out,” said Luke, who is developing his own line of stencil-backed mirrors.

Ms Laser said Luke’s drive exemplified the thinking behind the teenage market. “What we are giving young entrepreneurs is a chance to try their hand at business. They just need an opportunity and here it is at the teenage market.”

Kai Sethna (15) and Hugh Westcott (14), two pupils at Queen Elizabeth’s Boys’ School, have launched LDN_HYPE, a business selling designer street wear. They started online last October and their stall at the teenage market was their first attempt to sell direct to the public.

Business was brisk at the stall of Maud Quinton (14), from the 6th Friern Barnet Scout Group, who was selling home-made sweets, soap and lavender bags to raise money to finance her trip to the 24th World Scout Jamboree in West Virginia in the summer of 2019. 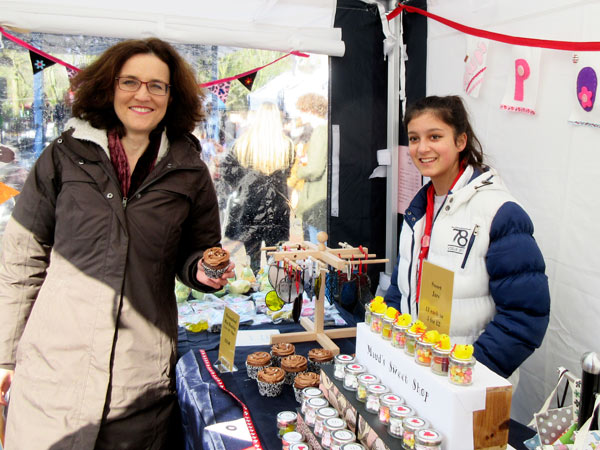 Theresa Villiers MP at the stall of Maud Quinton Maud is one of 36 UK Scouts, chosen from 156 finalists, to gain a place at the Jamboree. So far, she has raised £2,000 towards the £4,100 she has to find to finance the trip.

Maud and her mother, Mrs Fiona Quinton, welcomed Theresa Villiers to the stall. Ms Villiers bought a specially decorated cup cake and said she was delighted to support such a worthy cause.

The next teenage market is on Saturday 5 May.