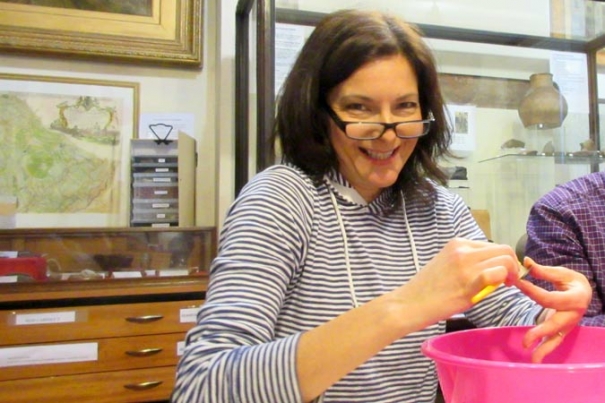 Mrs Katy Rawlings cleans an Elizabethan silver sixpence unearthed on farmland off Kitts End Lane
A medieval silver farthing that might have been in use at the time of the Battle of Barnet of 1471 is the most dramatic find discovered so far during searches with metal detectors on farm-land beside Kitts End Lane.

Volunteers at Barnet Museum, who are cleaning and sorting a great variety of metal objects, whooped with delight when Sam Wilson, the military archaeologist from Huddersfield University who is leading the excavation, declared that the silver coin was the closest his team had got to unearthing a direct link to the battle.

“It is a farthing from the reign of either Edward IV or Henry VI, and might well have been in circulation at the time of the Battle of Barnet. Unfortunately the king’s head has been defaced, probably by someone trying to cut the coin in half, so we are not sure yet of the date.”

Another coin found nearby was a silver Elizabethan sixpence dated 1590.

Mr Wilson said the coins were probably dropped by people walking or riding along Kitts End Lane, which at the time was the main road to St Albans.

After searching a large ploughed field, a team of 12 volunteers using metal detectors have switched their survey to pasture-land inside Wrotham Park as they continue their search for the precise site of the battlefield.

Mr Wilson is optimistic that his team will find artefacts that can be traced back to the battle.

Mrs Barbara Farnley, one of the volunteer cleaners, was impressed with the care being taken to tag each item with a find number and name so that the location could be pinpointed later.

It is really exciting to think we might be handling items that date from the battle.

Another volunteer, Mrs Helen Foster, who was assigned the delicate task of cleaning the medieval silver farthing, said she felt privileged to be taking part.

“My daughters are doing history at school, and they’re fascinated by the thought that we could make some really important discoveries.”

Mrs Katy Rawlings, who cleaned the Elizabethan sixpence, was surprised by the clarity of the markings.

“Elizabeth’s head is so clear. I can hardly believe I have been cleaning a coin that someone probably dropped hundreds of years ago in Kitts End Lane.”