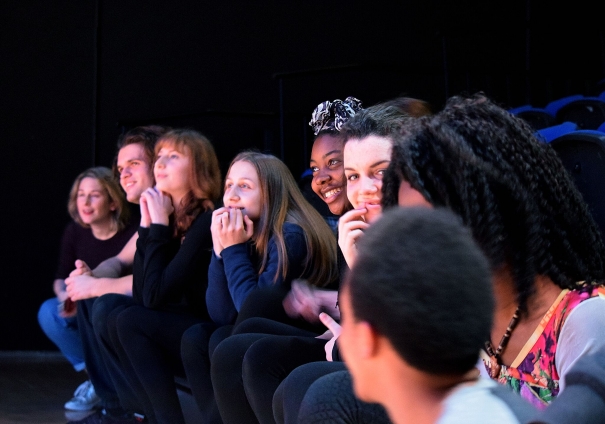 Workshop where students shared their experiences as part of a theatrical project to tackle cyber-bullying
Two students who took part in a workshop at the Wood Street campus of  Barnet and Southgate College are to appear in a new play, Cookies, that explores the challenging world of cyber-bullying.

Cookies, written by Emily Jenkins, will have its premiere at the Theatre Royal, Haymarket, on Sunday 29 October.

The play is part of a pioneering theatre initiative to support the health and well-being of young people affected by cyber-bullying and looks at the risks young adults face online.

Naseem Hosany and Love Siega, the two Barnet College students to appear alongside the established actors, were among 16 students who took part in a workshop at the Wood Street campus.

Workshops were held at four London colleges as part of the Cyberscene Project and 25 from the 120 students who took part were chosen to appear in Cookies, directed by Olivier award nominee Anna Ledwich.

The play explores the risks faced online and how these effects can accumulate beyond the control of young adults and how solidarity can be found in a combination of online and offline interactions.

Some of the students chosen to perform in the pay will tell their stories verbatim.

The workshops began a year ago and will continue during rehearsals.