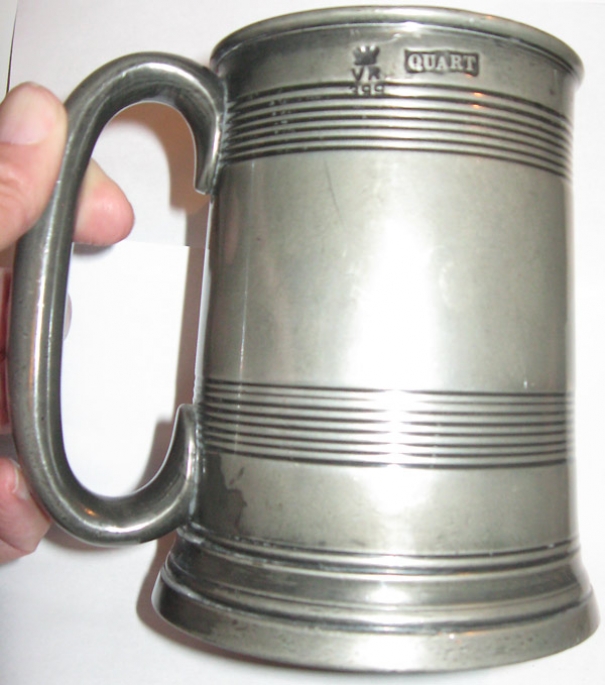 Each bears the engraved script letters MJB on the side opposite the handle, and the words ‘Bull’s Head, Wood Street, Barnet’ deeply but neatly scratched around the edge of the base.

Richard Selby’s book Barnet’s Pubs says the Bull’s Head is now one of the cottages on the northern side of Wood Street, between the parish church of St John the Baptist and Ewen Hall.

The Barnet Society has been asked to help identify possible owners of the two quart measuring jugs.

In addition to the letters MJB and the reference to the Bull’s Head, other markings include the letters VR above the number 399, which was the universal verification mark used from 1882 by Hertfordshire County Weights and Measures Inspectors.

Michael Brian, who is sorting out the archives of St Peter’s Church, says he has been unable to find out how St Peter’s acquired the two jugs, and he has been asked by the church to explore how they might be disposed of.

Mr Brian said in his email to the Society that he was keen to find out whether the Bull’s Head still existed and whether it was possible to contact the landlord or one of his predecessors.

He stressed that the church had an obligation to make the best use of its assets, and would have to explore the most beneficial ways of disposing of them.

Contact: This email address is being protected from spambots. You need JavaScript enabled to view it.