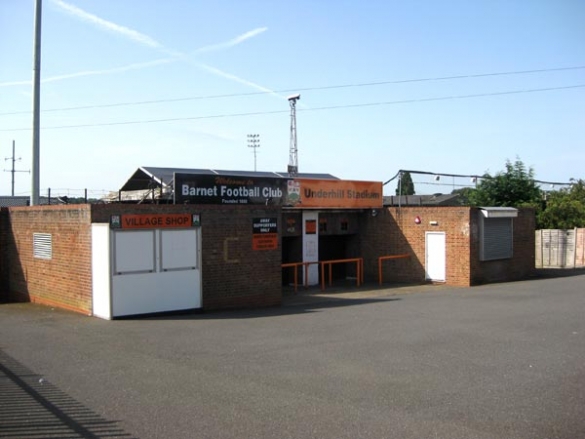 Barnet Football Club
Barnet Football Club’s match against Wycombe Wanderers in the npower League 2 on Saturday 20 April will be the Bees’ last fixture at Barnet’s Underhill stadium. From the end of August and the start of the 2013-14 season, Barnet FC’s home fixtures will be played at the Hive Football Centre in Camrose Avenue, Edgware.

The club said the switch from Barnet had been agreed with Harrow Council and the April 20 fixture would be the last League 2 game at Underhill, the Bees’ home ground for the last 105 years.

The future use of the stadium has yet to be decided: Arsenal Reserves, who play occasional matches at the ground, might hold more fixtures at Underhill and other options were also being considered.
Barnet FC (www.barnetfc.com) was established in 1888 and the end of the town’s long association with professional football will be a sad loss after an acrimonious dispute with Barnet Council over the future development of the stadium which has a limited 4,057 capacity.

Although there has been continuing speculation about a last minute reprieve with the prospect that the club might have another year at Underhill, the website of the Hive Football Centre (www.thehivelondon.com) leaves no room for doubt: “The Hive London is first and foremost home to Barnet Football Club.  It is the club’s new training ground and soon to be stadium following the move from Underhill at the end of the 2012-13 season.”

Harrow Council agreed last year to grant Barnet FC a ten-year lease on the Hive Football Centre in the Prince Edward playing fields at Canons Park, Edgware, and allowing professional league football to be played there for the first time.

52 per cent expected to increase or maintain the same level

Barnet FC has already spent nearly £4 million renovating and improving its training ground at the Hive and the club’s chairman Tony Kleanthous said last year that the completion of the new stadium in time for the start of the 2013-14 season would take the total investment to £20 million.

Some Barnet FC fans appear to have mixed feelings about the move to Edgware.  A consultation exercise conducted by the Barnet FC Supporters’ Trust (www.bfctrust.co.uk) at the end of the 2011-12 season revealed the underlying unease.

When the results were published last June the survey showed that from 390 completed questionnaires, “52 per cent expected to increase or maintain the same level of attendance if the club played its first team games at the Hive with 48 per cent expecting to attend less or stop going altogether.”