Archaeologists to find real site of Battle of Barnet 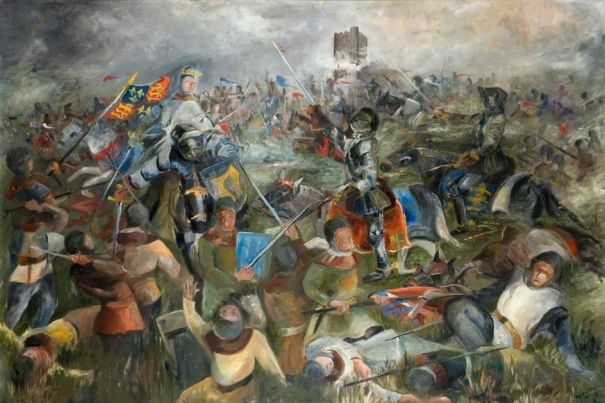 The exact site of the Battle of Barnet, a decisive engagement in the Wars of the Roses, has always been a matter of dispute.  It took place in fields half a mile, or even up to a mile, north of the town but English Heritage says the boundaries are not clear and so far it has not been possible for historians to determine the exact location.

The Barnet Society and other local groups are being asked to give their support to the application to the Heritage Lottery Fund.  Dorothy Cohen, the Battlefields Trust’s representative for London and the south-east, said they were hoping to raise the funds needed to “carry out a dig to try to locate the actual battle site”.

News of a possible dig will give impetus to other initiatives that are also being considered to commemorate the Battle of Barnet and will also do more to promote and celebrate Barnet’s rich history.

One idea being considered by the Barnet Society is the possibility of holding a commemoration or re-enactment of the Battle of Barnet in the summer of 2015.  A weekend in June has been suggested and the Byng Road playing fields might provide a suitable venue.

The exact site of the Battle of Barnet, a decisive engagement in the Wars of the Roses, has always been a matter of dispute.

Another possibility is that students from Barnet and Southgate College might get involved in a project to map and photograph the area where the battle is thought to have taken place.

A Battle of Barnet display is one of the highlights of Barnet Museum’s collection, and the Museum and Local History Society take every opportunity to promote interest in Barnet’s historic place in the Wars of the Roses. 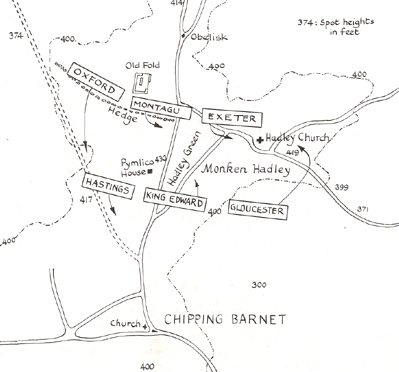 The Battle of Barnet, on 14 April, 1471, and the subsequent Battle of Tewkesbury, secured the throne for Edward 1V.

He led the House of York in a fight against the House of Lancaster, which backed Henry VI for the throne.  Leading the Lancastrian army was the 16th Earl of Warwick.

Historians regard the Battle of Barnet as one of the most important clashes of the Wars of the Roses since it brought about a decisive turn in the fortunes of the two houses.

Edward’s victory was followed by fourteen years of Yorkist rule over England.

English Heritage demarcates the battlefield as lying 800 to 1,600 metres (0.5 to 1 mile) north of the town of Barnet, but there are only approximations of where the fighting took place.

A 15th -century letter from a Hanseatic merchant, Gerhard von Wessel, mentions a “broad green” which corresponds to Hadley Green and a marsh which is likely to be in the valley of the Monken Mead brook. The letter also mentions the St Albans Road.  Houses in Monken Hadley now stand on part of the fields where it is thought the battle was fought.

Hadley Highstone, an obelisk commemorating the battle, was erected in 1740 by Sir Jeremy Sambroke and stands at the junction of the Great North Road and Kitts End Road. 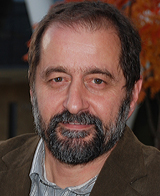 It carries the inscription: “Here was fought the Famous Battle Between Edward the 4th and the Earl of Warwick April 14th Anno 1471 in which the Earl was Defeated And Slain.”

Glenn Foard and the Battlefields Trust have a proud record in identifying and protecting battlefield sites. Foard, who is Reader in Battlefield Archaeology at the University of Huddersfield, is best known for discovering the location of the final phases of the Battle of Bosworth Field (1485).

In 2009 Foard and his team discovered artefacts to support his theory that the site where the Bosworth visitor centre is currently located is several miles from the actual spot where the battle was fought.

Such is the 18th and 19th-century urbanisation of the fields to the north of the original town of Barnet that Foard and his team will have a mammoth task on their hands and will have lots of theories to work through.

Among the local legends to be either proved or disproved is that a hedge at the Old Fold Manor Golf Club at Monkey Hadley is the likely line of the shrubs behind which the 13th Earl of Oxford’s men lined up and took cover when he rallied the Lancastrian troops!

An excavation to discover the location of the Battle of Barnet would form part of a wider project on the Wars of the Roses which would be undertaken jointly by the Battlefields Trust and the University of Wakefield.  The aim would be to improve understanding and access to the various sites across the country where military engagements took place; again it would depend on securing financial assistance from the Heritage Lottery Fund.