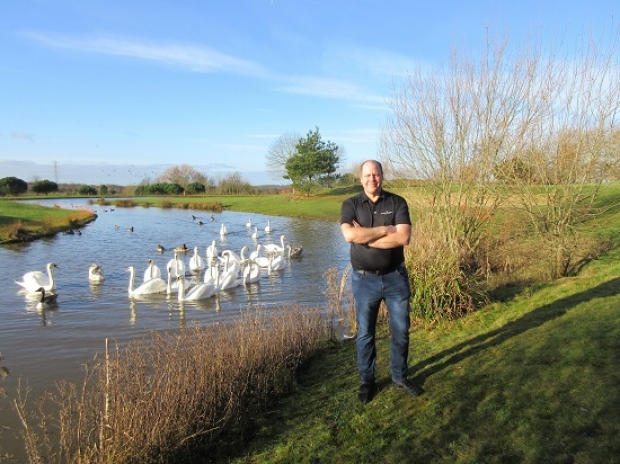 Safeguarding the swans is currently top priority for Darren Knott
People walking across the Shire London golf course during lockdown are being urged to act responsibly after repeated reports of swans and geese being harassed by dogs running off the lead.

There are seven lakes spread around the 18-hole course, just off the St Albans Road, Barnet, and they are home to a wide range of wildfowl that also includes moorhens, coots, cormorants, and herons.
The appeal to owners to keep their dogs under control is all the more urgent as swans and other birds are pairing off at the start of the breeding season.

Darren Knott, the club’s events and catering manager, fears that unless walkers abide by the rules and keep dogs on the lead there may be a repeat of the traumatic events during last year’s lockdown when several swans were chased, and one was found dead.
“We realise people are desperate for fresh air and exercise during lockdown and inevitably, when they know playing golf has been banned during the pandemic restrictions, they want to walk along the paths across and around the golf course.
“But the signs reminding walkers that the course is private land – and that dogs should be on the lead – are there for a purpose: they should be respected,” said Mr Knott.

During a Sunday morning tour of the course Mr Knott had to speak to numerous families, walkers and joggers who had dogs that were running freely around the course, some getting close to the lakes and frightening birds.
More people are walking on the footpaths over the course because the perimeter path – from the Byng Road playing fields to the woods at Dyrham Park – is exceptionally muddy after weeks of rain.
“Most people do comply immediately when I remind them dogs must be on the lead and we are appealing to local residents and visitors to act responsibly in return for the pleasure they obviously get from being able to walk across such magnificent parkland.” 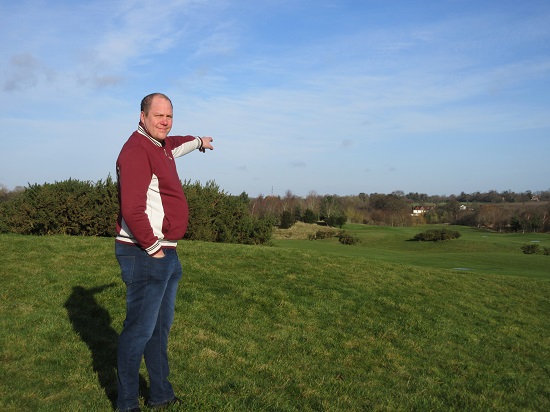 Mr Knott says he has learned by experience how to be polite, but fair and firm with the public: he was a staff sergeant in the Royal Engineers and served 22 years with the Army.
As he lives nearby in Alston Road, close to the course, he responds readily to reports of unruly dogs endangering the swans and if walkers see wildlife in distress, they can ring his mobile number, 07584 418576. 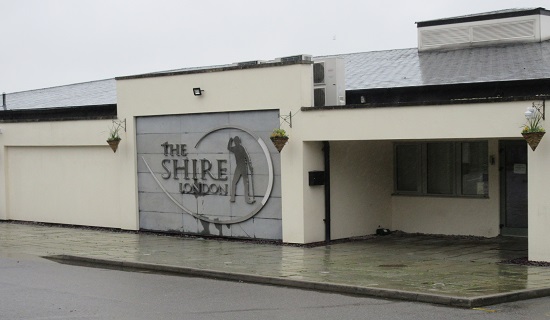 Protecting and enhancing the flora and fauna of the course is a high priority for the Shire’s owners Tony and Anne Menai-Davies who encourage local environmentalists to help safeguard birds, animals, and rare plants.

A far corner at the perimeter of the course has been fenced off so that the grassland is not disturbed, and it is home for grass snakes; similarly, when orchids – such as pyramid orchids – and other rare flowers are found they are protected.
Much of the work is done by wildlife conservation volunteer, Kitt Jones, a former warden for the London Wildlife Trust, who manages the ponds and aquatic life and is proud of the Shire’s achievements in safeguarding its natural habitat.

“We now have one of the best populations of grass snakes in north London. The snakes feed on the fish, frogs, and newts in the ponds. We do have some great crested newts as well.
“Another great benefit of the lakes is that they support 12 species of dragon flies as well as damsel flies and we are encouraging the weed beds as our summer visitors include sedge warblers.” 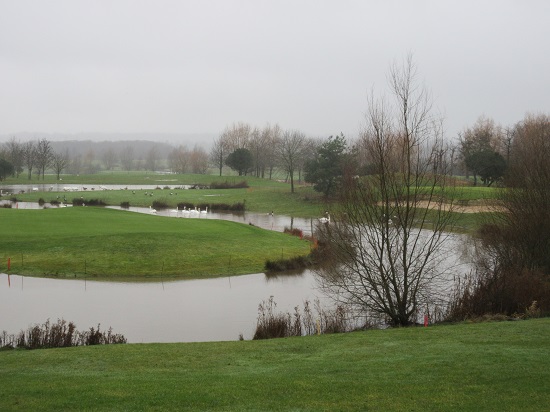 The Shire’s 18-hole masters’ course – and its nine-hole academy course – were designed by Steve Ballesteros in 2007 and when opened it was known initially as Bridgedown Golf Club.

A lake below the clubhouse, at the 18th hole, is S-shaped – a lasting signature for Ballesteros.

The construction and landscaping of the course, with its undulating contours and lakes, was opposed at the time by local environmentalists because it meant the loss of open farmland and scrubland that had had previously supported a wide range of wildlife including skylarks whose singing overhead was greatly appreciated by residents and walkers along the northern edge of High Barnet.

A campaign to prevent landfill being deposited at the site was well marshalled and activists spent many hours monitoring the content of lorries to prevent the dumping of contaminated material.
Mr Knott, who has been at the Shire London ( https://theshirelondon.com ) since April 2019, believes the course, with its acres of grass and woodland, is a worthy successor in its role as a natural habitat.
“The Shire really is a haven for wildlife, whether its foxes, swans, gulls and owls – or the even the birds of prey we sometimes see hovering overhead.”
Mr Jones agrees: “The Shire does everything it can to safeguard an exceptional natural habitat. We did have one pair of skylarks last summer – well down on the three or four pairs of previous years – but unfortunately skylarks have been lost throughout much of Hertfordshire and we are no exception.”

Published in General News
More in this category: « Barnet historians eager to see 1921 census - and getting ready for 2021 We will be back, say Battle of Barnet re-enactors »